Called Moments, it will automatically detect people's friends in their smartphone camera roll 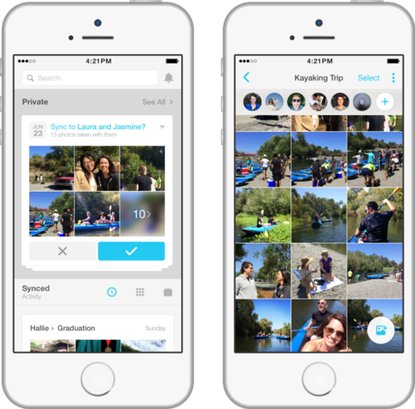 Facebook has taken a step away from its main site to develop what it thinks is a better way to share photos privately.

Moments, released Monday for iOS and Android, is a standalone app that will organize the photos on people's smartphones, and let users share them privately with a select set of friends. The app groups photos together based on when they were taken, and, who's in them. It uses the same facial recognition technology that powers the suggested tagging feature on Facebook's site.

Moments lets users sync photos with the people who are at a specific event, like a party or wedding.

The app attempts to solve a 21st Century problem: people don't always want to post every photo of their friends on Facebook, but friends still want to see the photos taken of them on other people's phones.

The app removes the need to dig through one's smartphone to find each photo of, say, John and Mary taken at the wedding, and then text or email them each photo. Moments will group those photos together, and let the user share them all at once with John and Mary. The app does not post the photos on Facebook unless users want to.

It arrives as some of the company's rivals, like Google and Yahoo, develop increasingly sophisticated photo sharing and storage services incorporating their own image recognition technology.

Google recently released Google Photos, which will automatically recognize specific people, places and objects inside photos, and let users search for items depicted in the photos.

Yahoo's Flickr also has a new feature that automatically tags elements in photos for easier sorting.

Moments is available now starting in the U.S.; plans for a desktop version were not announced. Facebook users can control image tagging in their settings.