The Upload: Your tech news briefing for Wednesday, June 10 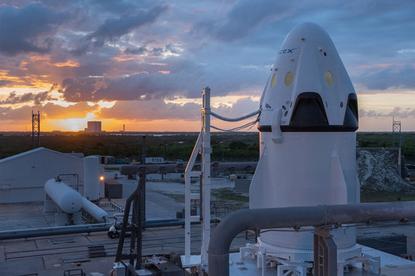 SpaceX's Dragon spacecraft on the launchpad.

There were murmurs in advance of the Apple Music debut this week that Apple was using the industry power it wields via iTunes to pressure music labels not to permit any free tier streaming through rivals like Spotify. Now it's been confirmed that the attorneys general of New York and Connecticut are looking into just that issue, and whether Apple may have run afoul of antitrust law in hammering out its deals.

Reports that the U.S. tried unsuccessfully to sabotage North Korea's nuclear program some years ago have drawn the threat of a counterattack from the isolated nation. In an article published in the country's largest daily newspaper on Tuesday, North Korea said it would wage a cyber war against the U.S. to hasten its ruin. Hacking does seem to be in the country's offensive arsenal: It was blamed for last year's devastating attack against Sony Pictures.

Microsoft pumps Xbox One up to 1TB

Microsoft will have a new Xbox One console with 1TB of storage and a wireless controller ready to ship on June 16, the first day of the E3 gaming conference, PC World says. It will sell for $400 and comes in a new matte-black finish. Microsoft's move could be a pre-emptive strike against rival Sony, rumored to be close to unveiling a 1TB PlayStation 4.

Apple may not get 90 percent of current Mac owners to upgrade to its new version of OS X, El Capitan, but the good news is they can if they want to, Computerworld reports. And a much larger chunk of the Apple mobile devices now in use will be upgrade-eligible than ever before: iOS 9 will run on all the devices able to run 2014's iOS 8. So users hanging on to those iPhone 4S's can keep them going just a little while longer.

With the U.S. and Canada lagging in adoption of chip-enabled payment cards, point-of-sale systems are the go-to weak point for cybercriminals in North America, according to Trustwave's 2015 Global Security Report. Incorporating chips makes it extremely difficult for attackers to clone the cards even if they steal the data encoded on their magnetic stripes, which is why attackers in Europe are more likely to target e-commerce websites, Trustwave said.

Researchers at Harvard University have developed flexible electronics that can be injected directly into brain tissue and directly monitor and stimulate the organ. The technology could open up new applications in medicine and brain-machine interfaces, which can read thoughts and act upon the external world, such as controlling a wheelchair by thought alone.

At a Berlin event attended by Google Chairman Eric Schmidt, the CEO of Audi made some pointed comments about how the carmaker will guard customers' data, Reuters reported. Rupert Stadler said that "the only person who needs access to the data onboard is the customer," and added that customers don't want to be exploited. Google is pushing hard into the automotive sector with autonomous vehicles and its in-car software platform, and some privacy advocates worry about how it will use the data it might gather.

The Exiii Hackberry is a 3D-printed mechanical hand and forearm designed to give amputees a cheaper alternative to prosthetics that can cost thousands of dollars.

India's booming tech sector is luring back American-educated engineers who see better prospects at home than in the U.S.