The Upload: Your tech news briefing for Monday, June 8 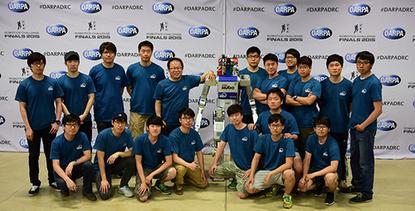 South Korea's Team Kaist took the top honors in the DARPA Robotics Challenge finals on Saturday after a two-and-a-half-year battle. The group won a $2 million prize in the competition among 24 teams of roboticists from around the world, Computerworld reports. Their nearly six-foot-tall, 176-pound humanoid robot finished all eight tasks in the course in just 44 minutes and 28 seconds.

Apple Pay for UK, streaming music to debut at WWDC

Apple is expanding the reach of its mobile payments system, with Apple Pay slated for launch in the U.K. in a couple of months, the Telegraph reports. The newspaper cited sources saying that the news will break at the World Wide Developers Conference on Monday, one of a number of announcements planned for the event. The CEO of Sony Music shocked no one this past weekend by confirming that Apple will unveil a streaming music service at WWDC.

Also-ran no longer? Sprint planning to beef up its network

Sprint has come to an agreement with its majority owner SoftBank to pour some investment into bringing its not-so-great network up to par and into competition, re/code reports. CEO Marcelo Claure has said that the overhaul will bring Sprint's network into contention for the number one or number two spot, but it will also dramatically increase its spending, re/code said.

Will tech companies' bug bounty programs -- that pay security researchers for vulnerabilities found and reported -- be replaced by services that connect companies with hackers? The backers of San Francisco start-up HackerOne think there's a market for a middleman, the New York Time reports, but the company takes a 20 percent commission on top of the bounties paid for bugs.

While U.S. intelligence agencies' bulk data collection practices are being reined in slightly by new legislation passed last week, no such limits have been placed on their counterparts in the U.K., and a new complaint by Privacy International aims to change that. The group is asking the U.K. Investigatory Powers Tribunal to stop the collection of data on millions of people who have no ties to terrorism and are not suspected of a crime.

US was warned that hacked system was an intruder's dream

In the wake of one of the biggest hacks of government systems ever, in which records on 4 million people were stolen from the U.S. Office of Personnel Management, it's emerged that a report issued last November "described the agency's computer security system as a Chinese hacker's dream," the New York Times said. Even then it was too late: the Times said that by the time the report was published, Chinese hackers had accessed tens of thousands of sensitive files and were getting ready to launch their broader attack.

Local police in as many as 70 U.S. jurisdictions are trying to crack down on criminals who prey on those looking to buy or sell valuables on online marketplaces like Craigslist, the Wall Street Journal reports. They are offering "safe online transaction zones" in parking lots or lobbies of police stations, aiming especially to protect those who may be making big-ticket deals on those sites.

Check out the sights at the finals of the DARPA robotics challenge.

Customers who need to know what Microsoft's plans really are for long-term Windows 10 support are left trying to parse what the company means by one crucial, oft-repeated phrase, Gregg Keizer writes at Computerworld.