Part of the first wave of Windows 10 devices, some of these feature biometric authentication 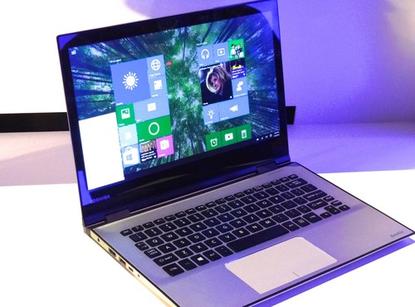 Shown off at a Microsoft event at Computex in Taipei on June 3, 2015, this Windows 10 Toshiba Satellite laptop is a 2-in-1, with a high-resolution 4K screen and an infrared camera that works with Windows Hello, the user authentication feature of Windows 10.

Microsoft has given visitors to Computex 2015 a sneak peek at several new devices that will launch with Windows 10, highlighting the capabilities of the new OS.

In a brief preview to manufacturing partners, Nick Parker, vice president at Microsoft's OEM Division, showed off a new super-portable 11.6-inch, 2-in-1 notebook from Hewlett-Packard's x2 series that has a magnetic hinge design, Bang & Olufsen speakers and a red anodized finish.

He also showed a hybrid 9-inch HP tablet that can attach to a full-size keyboard, which has its own case. Designed for note-taking on the go with a stylus, the tablet comes in a silver and aquamarine color scheme.

Parker also revealed a beta version of the Dell XPS 15, a thin notebook with a carbon fiber finish. It's a successor to the XPS 13 and features a 15-inch InfinityEdge thin-bezel display.

Sharing the stage at the Taipei International Convention Center was a new Toshiba Satellite laptop, also a 2-in-1, with a high-resolution 4K screen and an infrared camera that works with Windows Hello, the company's attempt to do away with passwords via face-recognition algorithms.

Microsoft said the new Toshiba is optimized for Cortana, the voice-driven assistant that will feature on Windows 10 platforms.

Discussing other new Windows 10 machines that were announced at Computex, Parker also pointed to the Acer Z3-710, an all-in-one with a 23.8-inch screen, the Asustek Computer Transformer Book T100HA, a 2-in-1 laptop with up to 14 hours of battery life, and the gaming-oriented Asus Zen AiO Z240, which has infrared 3D cameras in the bezel, six speakers and an Nvidia GeForce GTX 960M graphics card with up to 4GB of VRAM.

Windows 10 will become available in 190 countries starting on July 29, and Microsoft is trying to lure users with features such as Start menu improvements, the new Edge browser and interoperability across a variety of platforms. It's also dangling free upgrades for one year.

"600 million of those PCs of that 1.5 billion installed base of Windows users are over four years old," Parker said. "That is real opportunity for us to build solid business and solid new growth from."