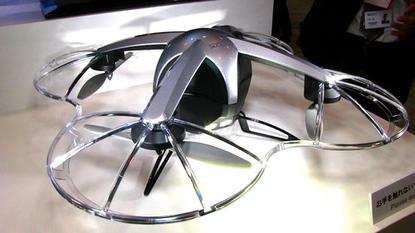 A Secom security drone exhibited May 22 at the International Drone Expo in Makuhari outside Tokyo can follow intruders and capture video.

If you think drones are more than slightly creepy, wait until you meet one that will autonomously follow you and record video.

Japanese security company Secom is launching a drone that will automatically launch when an intruder is detected and follow him or her while sending video to human supervisors.

The sleek silver quadcopter was shown off this week at the inaugural International Drone Expo held in Makuhari outside Tokyo, where about 50 companies gathered to exhibit drones and related technologies.

The UAV will be offered to businesses in Japan operating on relatively large parcels of land -- big enough to warrant a flying security camera -- such as shopping malls and supermarkets with large parking lots.

The drone can link with an intruder-detection system that sends beams of laser light along the perimeter of a secure space. When the detector senses motion, the drone automatically takes off from a nearby charging station to investigate.

It can send real-time video of an intruder or vehicle and even its license plate to a Secom security center for analysis.

"It won't leave the premises but will record imagery of intruders leaving it," said Secom spokesman Akihiko Takeuchi.

The robot's battery only allows it about 10 minutes of flying time, but it will automatically return to its station to recharge. The device has a high-definition camera and several sensors, but Secom would not provide details ahead of the drone's official launch in June.

Secom plans to offer the machines on a monthly rental basis to enterprise users as part of its security services, which include traditional burglar alarms and security guards.

The company has been working on robot security solutions since before the current drone boom. Its Robot X, developed over a decade ago, is a scooter-sized, mobile droid that can autonomously patrol an area, record imagery and release clouds of smoke to ward off intruders.

Japanese companies are developing security solutions for drones as the nation becomes more aware of their threat potential. Soon after a drone with trace amounts of radiation was discovered on the roof of the prime minister's office in April, the Tokyo Metropolitan Government banned the use of drones in public parks and gardens.

On Friday, police arrested a 15-year-old boy who allegedly said in an online video that he would fly a drone at a traditional festival in the capital, according to Japanese media reports. Japan has yet to formulate comprehensive rules on drone usage as lawmakers struggle to catch up with the nascent industry.

Last week, Secom rival Alsok announced a drone-detection system that can hear the distinctive hum of the flying machines from up to 150 meters away.