Xiaomi Mi 4i combines impressive specs with a $200 price tag 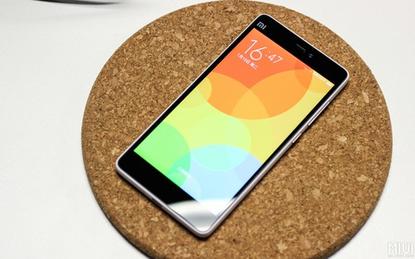 The Xiaomi Mi 4i is powered by Qualcomm's Snapdragon 615 processor.

Xiaomi is hoping the well-equipped Mi 4i will help the company grab a larger smartphone market share, but it's still holding off entering the U.S, and Europe.

Launching the smartphone at an event in India is a departure for the company, which thus far has launched its smartphones in China.

The Mi 4i can be summed up as a souped-up midrange smartphone with a low-end price tag at 12,999 rupees (US$205) without a contract. It has a 5-inch, 1080 x 1920 pixel screen and is powered by Qualcomm's Snapdragon 615, an octa-core processor with integrated support for LTE. The processor is a step below the Snapdragon 800 family, which is used to power high-end products.

One of the ways Xiaomi is trying to differentiate itself from the competition is by equipping the smartphone with a large, 3,120mAh battery while still keeping the size and weight down, at 7.8 millimeters thick and 130 grams. The rest of the phone's specifications include a 13-megapixel camera on the back and a 5-megapixel, wide-angle camera on the front, as well as 16GB of storage and 2GB of RAM.

Just like many of its competitors, Xiaomi has made an effort to improve the camera quality. The front camera has a two-tone flash and upgraded HDR (high dynamic range) imaging.

On the software side, the Mi 4i is the first Xiaomi model to run its MIUI 6.0 user interface on top of Android Lollipop. The company pitches the user interface as having better features for customizing the look and for frequently upgrading.

While smartphones in this segment are becoming increasingly competent, the designs can't keep up with more expensive products that use glass and or metal. Instead, the Mi 4i has a plastic unibody design with a matte finish.

Xiaomi's newcomer is far from the only device that's powered by the Snapdragon 615. It will compete with products like the Xperia M4 Aqua from Sony, Lenovo's Vibe X2 Pro, ZTE's Blade S6 and the Yu Yureka from Micromax. The latter costs about $140 in India and has a 5.5-inch, 720 x 1280 pixel screen.

The specs of these devices should put pressure on other vendors like Motorola Mobility that sell mid-range smartphones in the U.S. and Europe to update their products sooner rather than later.

During the launch, Xiaomi vice president Hugo Barra made a big deal of the tests Xiaomi runs to ensure the quality of its smartphones, including bend, drop and connector tests. This is part of a strategy to make sure that the company's products are seen as premium even if they are priced aggressively.

Choosing India as the launch country isn't a coincidence because smartphone penetration in the country is still low, and consumers aren't as wedded to specific brands, user interfaces and ecosystems as they are in parts of the world such as the U.S. and Western Europe.

The event was dubbed as the global launch of the Mi 4i, but that doesn't mean the smartphone will go on sale across the world. But it's easy to understand why Xiaomi isn't in a rush to start selling its smartphones in the U.S. and across Europe; it was, after all, the fifth largest manufacturer in the world in the fourth quarter of last year, even without a presence in those markets.

The Mi 4i will go on sale in India, Hong Kong, Taiwan, Singapore, Malaysia and Indonesia.