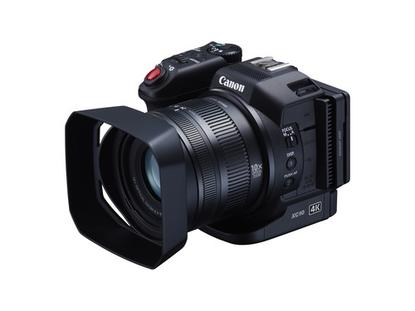 Canon's latest 4K camcorder, the XC10, has a relatively compact form and a rotating grip to get awkward shots. It goes on sale in mid-June for around US$2,000.

Canon thinks a rotating grip will help entice amateur video buffs to spend around US$2,000 on its latest camcorder offering "ultra high definition" resolution of 3,840 by 2,160 pixels, also known as 4K.

While it's not as cheap as Sony's $1,100 4K HDR-AX33 Handycam, Canon's XC10 offers some of the features of Canon's high-end Cinema EOS cameras for professional cinematography in a consumer format, along with a 27.3mm-273mm 10x optical zoom lens.

The XC10 is targeted at advanced amateur and pro users shooting video for news, promotions, films and other material.

Its most striking features are its compactness -- it's 125mm wide, 102mm high and 122mm deep -- and a large grip that can rotate upwards and downwards by about 90 degrees, helping users get shots from low or high angles.

A tilting LCD monitor makes it easier to capture such awkward shots. The included optical loupe viewfinder attaches to the back of the unit for a traditional perspective on the shot.

The camera has a slot for ultra high-speed CFast 2.0 memory cards, to which it can record at up to 305 megabits per second using the Intra Frame 4K video compression format. It can also record in full HD to an SD card at 50Mbps.

Canon also announced the EOS C300 Mark II, a 4K video camera for professional use, bringing its total number of 4K cameras on or soon to hit the market to four. The other two are the professional-grade EOS-1D C and the EOS C500, both released in October 2012.

The XC10 is expected to go on sale worldwide in mid-June for about $1,999 or 1,999 euros, according to a Canon spokesman in Tokyo.