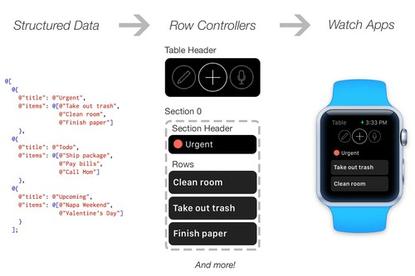 With the Apple Watch set for release on April 24, third-party application developers are rushing to write extensions that can run on the device. Now Instagram is sharing some code it wrote for its own app to help others.

The Facebook-owned company has posted a set of Objective C code that provides a way for an application to use complex data structures, which could facilitate feature-rich apps for the tiny device.

"We're really excited to be one of the first apps on the platform, and were able to build some solutions that we think will help other people build their apps more quickly and easily," Instagram engineer Ryan Nystrom wrote in an emailed statement. "We've been able to build on open-source technology at Instagram, so it's exciting for us to contribute, too."

Instagram's Watch app can display items from a user's Instagram photo feed and lets the user "Like" other photos and leave emoji comments.

Apple has published a preliminary framework for programmatically manipulating the Watch, though the company warns that some commands may change before the final release.

The Instagram code is different from Apple's standard software in how it deals with multi-dimensional data, or a single piece of data with multiple items within it. Instagram says it provides an easier way to do things like using that data to populate multiple choices in a hierarchical menu.

Instagram is not alone in rushing to build apps for the watch, many of which will probably serve as extensions of iPhone and iPad apps. Evernote, City Mapper, real estate listing service Redfin, Salesforce, and the U.K.'s Guardian newspaper all are preparing Watch apps.