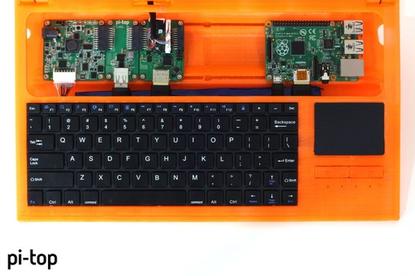 Do you want a Raspberry Pi 2 laptop? A new hardware kit coming from Pi-Top will help you build one at home in a matter of minutes.

The popular US$35 Raspberry Pi 2 is an uncased computer that is already being used in drones, robots, gadgets, tablets and even desktops. The otherwise stationary computer can be transformed into a laptop even by beginners with no hardware assembly experience.

The full Pi-Top kit includes a 13.3-inch screen, battery, trackpad, mousepad, laptop casings and Raspberry Pi 2, which would serve as the main motherboard. Users will be able to run a full Linux-based operating system and surf the Web, check email and run productivity software.

The laptop will be able to provide around eight hours of battery life, Jesse Lozano, Pi-Top co-founder and CEO, said in an email.

The Pi-Top kit will ship in May, Lozano said. The kit can be ordered for $299.99 with the Raspberry Pi 2, and for $264.99 without the board. The company has already shown working units of the Pi-Top, and Eben Upton, founder of Raspberry Pi Foundation, has used a Pi-Top machine.

The Raspberry Pi 2 was introduced two months ago as a successor to the original Raspberry Pi, which has sold more than 4 million units. The Pi has developed a cult following among do-it-yourselfers, and the Pi-Top kit could extend the board's appeal to regular laptop users.

It could also appeal to existing Raspberry Pi 2 users, who currently need to attach a keyboard and monitor to use the computer. Right out of the box, Pi-Top will provide those components in a single chassis. But at $265, it is an expensive Raspberry Pi 2 case.

Pi-Top was announced late last year, and raised $176,746 from a successful Indiegogo campaign. It was originally due to ship with the original 3-year-old Raspberry Pi board, which wasn't viewed as a PC replacement due to slow performance. But the Raspberry Pi 2 is six times faster than its predecessor and sports more memory, making it more feasible for use as an everyday laptop.

The Raspberry Pi 2 has a quad-core ARM Cortex A7 CPU, which is part of many low-cost smartphones. It also has a Broadcom VideoCore IV graphics processor, which will be able to render 1080p video. Additionally, it has four USB ports, an HDMI outlet, an Ethernet slot, microSD slot for storage and GPIO pins. The Pi-Top chassis will allow access to the many Raspberry Pi 2 ports, which will be accessible by pulling out a removable panel.

Beyond Raspberry Pi 2, the Pi-Top will also make laptops out of other popular single-board computers like Odroid, BeagleBone and Banana Pi.