Can the Apple Watch take down Samsung, LG, Sony and co?

Will the Apple Watch be anything more than the ultimate iPhone Accessory? 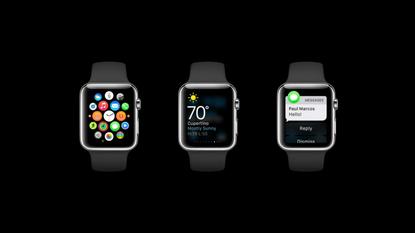 The newly released Apple Watch will be one of the best smart watches in the market, but will struggle to be anything more than the ultimate iPhone Accessory.

That’s the damning view of Ronan de Renesse, research analyst, Ovum, who believes the device will not have a “significant enough competitive edge” versus industry rivals Samsung, LG and Sony.

“Apple will have to go beyond just a great design and materials if it wishes to take the Apple Watch to the mass market and convince iPhone users who don’t wear a watch to wear one,” Renesse observes.

“The iPhone and the iPad redefined their respective device segments when they launched, however the Apple Watch will not play that role.”

According to Renesse, and unfortunately for Cupertino, cheap design copycats will successfully thrive, especially in China where it is set to launch on April 24.

Furthermore, the devices “comparatively high” US$349 entry-level price point will be more difficult to sustain, but Renesse believes the China launch will help Apple pass 10 million Apple Watch unit sales in 2015, bringing over US$5 billion in revenues in its first year.

On the flip side however, if anyone can create a buzz around a new product then it is Apple but when it comes to smart watches it will still have its work cut out.

In Ovum’s 2014 Consumer Insights survey only 15% of respondents said they had any plans to buy a smart watch in the next six to 24 months.

“Apple will have to change this mind set if it wants the Apple Watch to be successful, and next to beautiful design, clever applications will be a critical means to achieve this,” adds Eden Zoller, research analyst, Ovum.

“Apple Pay is intended to figure in this equation, but although the m-payment application appears to be enjoying early success on the iPhone 6, it will not necessarily follow the same trajectory on the Apple Watch.”

Zoller believes the prospect of wearables, smart watches or otherwise, becoming a mainstream platform for m-commerce is debatable with the most immediate problem a lack of scale, not helped by steep price points and a perception among consumers that wearables are still novelty products.

“Wearables are a challenging environment for developers as the market is fragmented, while wearables present completely new form factors and usage scenarios,” Zoller adds.

“Wearable devices will ultimately have a more narrowly defined m-commerce remit than smartphones and tablets, and be best suited to lower value “tap and go” mobile proximity payments, for example in travel and transit.”