Against the odds, Canonical and Jolla trot out iOS, Android alternatives

The smartphone OSes have something different, in a good way, to offer 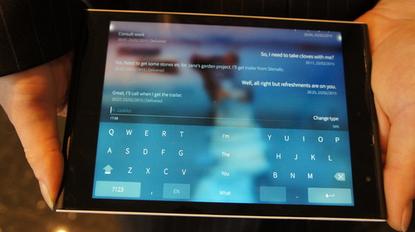 Version 2.0 of Jolla's operating system Sailfish has a split keyboard

Four smartphone OSes that hope to find room next to Android and iOS were on display at Mobile World Congress, but the most exciting were Ubuntu Phone and Sailfish OS.

Apple and Google have further tightened their grip on the smartphone OS market; they had a market share of 96.1 percent last year, up from 94 percent in 2013, according to Gartner. However, that hasn't deterred Mozilla, Samsung Electronics, Canonical and Finnish start-up Jolla from developing their own OSes.

At Mobile World Congress they all showed commercial devices for the first time. Mozilla's Firefox OS and Samsung's Tizen have user interfaces that are very reminiscent of Android, but Canonical with Ubuntu Phone and Jolla with Sailfish have been either brave or stupid enough to try something different.

The birth of Ubuntu Phone hasn't been the easy. Canonical's aspirations first made headlines in 2013 when it launched an Indiegogo project to collect US$32 million to produce the Edge smartphone, which was supposed to ship in May last year.

However, the project failed and the first Ubuntu-based smartphone, the BQ Aquaris E4.5, went on sale last month in Europe for €170 ($190).

At Mobile World Congress, Canonical also demonstrated Ubuntu Phone running on the Meizu MX4 LTE smartphone. It's the better of the two with a specification that includes a 5.4-inch, 1152 x 1920 screen, a 20.7-megapixel camera and up to 64GB of integrated storage.

The basic building block in Ubuntu Phone is what Canonical calls scopes, which are screens that aggregate information related to a particular topic. They include News, Music, Nearby and Today screens. The latter two list information related to your location and personalized information, such as favorite contacts. But the OS also has traditional apps.

Users navigate in Ubuntu Phone by swiping left, right, up and down. For example, a swipe from the left reveals a launcher and a long swipe from the right reveals all running apps and scopes. Users can also switch between scopes with shorter swipes to left and right. This might sound complicated, but is in reality quite easy to understand.

When I tested Ubuntu Phone running on the Meizu MX4, which will go on sale soon, the OS still felt a little rough around the edges, but I like the basic concept of the scopes. It would be a shame it Canonical wasn't able to develop its full potential.

The other worthy challenger, Jolla, was founded in 2011 by former Nokia employees who wanted to continue the development work the Finnish phone maker had done on the MeeGo operating system.

The company shipped the first smartphone running its Sailfish OS at the end of 2013. It's now working on a tablet, which was demonstrated at Mobile World Congress running Sailfish 2.0. The navigation in this upcoming version of Sailfish feels even more straightforward than Ubuntu Phone's.

Sailfish is also based on gesture navigation. The home screen shows large icons of running apps, and with a swipe from the left users can access a screen that aggregates messages and some settings. To get back to the home screen from an app users just have to swipe from either side. It's a pretty easy concept to grasp even if you haven't used the platform before.

There is no doubt that Jolla and Ubuntu as well as Samsung and Mozilla face massive challenges. Windows Phone's struggles have shown how difficult it is to compete with Android and iOS even if you have massive resources.