The CEO could answer questions about Internet.org and new WhatsApp features 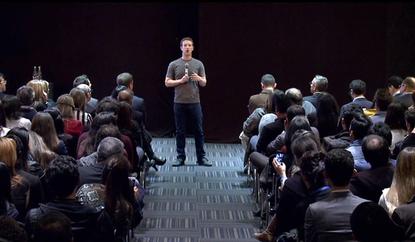 Facebook CEO Mark Zuckerberg is likely to reveal more of the company's plans to bring underserved parts of the world online when he holds Facebook's fourth public Q&A next Wednesday in Barcelona.

The event will be held 6 p.m. Barcelona time (that's 9 a.m. Pacific time in the U.S.), during the Mobile World Congress tech trade show in the same city. Zuckerberg is set to share updates about Facebook's Internet.org project for connecting more of the world during an appearance at the show on Monday. He may expand on those comments in Wednesday's Q&A.

In addition to fielding questions from a live audience, Zuckerberg will answer some of the most popular questions posted online. Questions can be submitted online in the lead-up to the event, which will be streamed live.

Hundreds of questions and comments have already been submitted, covering topics including Internet.org, WhatsApp, drones, harassment, and image recognition technology. Zuckerberg has already responded to some of these questions online.

One person asked why Internet.org comes with limitations, or access only to basic services and not the entire Web.

There are a couple reasons, Zuckerberg said. First, the program is just getting started, and second, offering the whole Internet free would be too expensive and not sustainable.

Facebook's Internet.org app is currently available in a handful of countries overseas providing access to services like weather, news, search and health information. Facebook launched the app in India earlier this month.

One user asked online how helpful the app would be to people in India who are illiterate.

Still others wanted to know what other features or services might come out of Facebook in the next months and years.

"Working on it," Zuckerberg responded, with a smiley face emoticon.

One user griped about the inability to ever get a live person for technical support on the site. Another asked for a way to turn off auto-play videos, so as to avoid "upsetting images." (Zuckerberg hasn't answered either of these, yet.)

Other questions revealed a sophisticated level of futuristic thinking among Facebook users.

Another user asked: "Will facial recognition software ever be implemented to help bring together someone who has lost their pet to match with a person who has found that same pet?"

Priscilla Chan , Zuckerberg's wife, has said that their dog Beast is Zuckerberg's number-two priority after Facebook. Maybe Zuckerberg will give an interesting answer here.