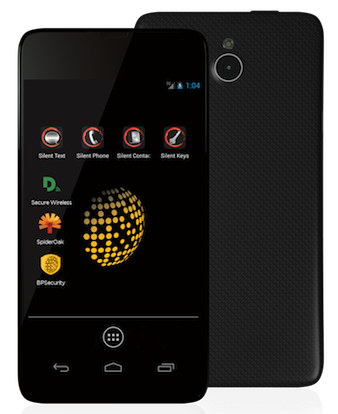 The Blackphone will sell for $629 and will ship in June.

Paranoid tablet users, rejoice. The first units of the secure Blackphone tablet will be demonstrated at the upcoming Mobile World Congress show in Barcelona early next month.

The tablet will be the second product from SGP Technologies, which makes the privacy-centric Blackphone smartphone. A pre-release version of the tablet will be shown at the booth of Graphite Software, which has written a special interface for the device to run sensitive applications.

SGP is planning a press conference at MWC where it will probably announce the tablet. A Blackphone spokesman declined to share details on the tablet launch or the press conference. However, a Graphite Software executive said the tablet would be announced at MWC and would be on display at Blackphone's booth as well as Graphite's.

Little is known about the Blackphone tablet. Its development was revealed last October, and the product could share some features with the US$629 Blackphone handset, which has attracted attention for its ability to encrypt phone calls, text messages and other forms of communication.

Blackphone has been busy lately, preparing to launch a mobile app store called Silent Store that will sell secure apps. The Silent Store is expected to go live in early 2015, according to the company.

Tablet sales are flattening, but security lapses are also growing, so the Blackphone device may appeal to some business users, said Bob O'Donnell, principal analyst at Technalysis Research.

Though bigger than phones, tablets are still susceptible to theft. Phone makers are continually adding features to address growing concerns about mobile data security. Some examples include kill switches to disable smartphones and security packages like Samsung's Knox.

Growth in the tablet market is being driven by low-cost devices, so a high price on the Blackphone tablet might reduce its appeal. But tablets users paranoid about security will buy the device, O'Donnell said.

"Bottom line is we're entering an era where we may have to pay for security and privacy, and that's what these guys are offering," O'Donnell said.

Some security heavy hitters are involved in the development of Blackphone, including Phil Zimmerman, creator of e-mail encryption software Pretty Good Privacy, and Jon Callas, who created Apple's whole-disk encryption system and was co-founder of PGP Corp. SGP Technologies is a joint venture between Silent Circle, which sells security software, and Geeksphone, which develops handsets.