Despite a government block on Google, the company is still trying to reach developers in the country 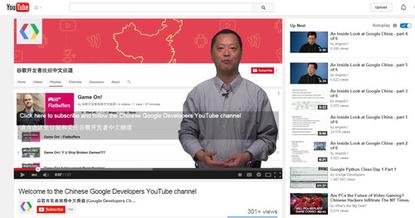 Even as China continues to block its services, Google has started a localized YouTube channel for developers in the country, aiming to bring more Chinese-made apps to its platforms.

The new YouTube channel, announced on Monday, will serve up videos discussing Google technologies such as Android, either translated with subtitles, or spoken in Mandarin Chinese.

The company announced the channel about four months after it opened Google Play to developers based in mainland China.

The country is already home to a burgeoning number of developers, both large and small, who are making apps for Android, the most popular mobile OS in China.

By opening up its Google Play store, the U.S. search giant is hoping to help Chinese developers sell paid apps over the platform. In return, Google will transfer revenue generated by the apps directly to the developers' bank accounts.

Although it could potentially tap a large developer community in China, the company has had a rocky relationship with the country's government over online censorship matters.

In China, Google was one of the few services to offer uncensored search results. But authorities have often tried to silence any Internet products that could fan anti-government sentiments.

In 2009, China cut access to YouTube, and last year, it decided to block all Google services, amidst a clampdown on foreign Internet services.

Apple, on the other hand, has a thriving app store in China that's also been helping local developers reach customers outside the country.

But even with Google blocked in China, some users are managing to circumvent the censorship, by relying on paid services such as virtual private networks (VPNs).

Many Chinese companies use VPNs to connect with foreign Internet services such as Google and Facebook to do business, or to buy online advertisements targeting international clients.

On Tuesday, Google declined to comment on how well its Play Store is faring with Chinese developers. But the company's latest efforts could help smaller developer teams in China reach a bigger audience.