Samsung continues to struggle in the market due to stiff competition 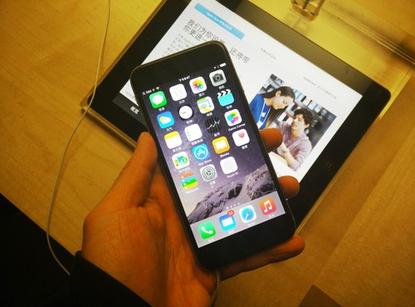 The Apple iPhone 6 at a Beijing Apple Store.

Apple's iPhone 6 has been a hit in China, but according to one account, rival Xiaomi still reigns as the country's largest smartphone vendor.

The rankings are, however, different from those of another research firm Canalys, which put Apple as the top vendor, and Xiaomi second.

Apple achieved in the fourth quarter its highest quarterly market share in China over the past two years, and it came from strong demand for its newest iPhone, said Xiaohan Tay, an IDC analyst.

Chinese consumers have been hungry for bigger-screen smartphones, and so the iPhone 6 and 6 Plus were expected to fare well in the market, despite their high price tags. In China, the iPhone 6 starts at 5288 yuan (US$862), when bought without carrier subsidies.

But Chinese consumers are still flocking toward lower cost handsets. That is the reason local smartphone player Xiaomi, a maker of inexpensive Android phones, managed to hold on to the top spot.

During the fourth quarter, the company's low-priced Redmi handsets, which can start at 699 yuan, helped propel Xiaomi to the number one ranking, Tay said.

As for Samsung, the Korean electronics maker struggled to regain its position in the Chinese market, due to the stiff competition. In the fourth quarter, it was placed fifth, with a 7.9 percent share, behind Huawei and Lenovo.

Apple is taking away market share from Samsung at the high-end, while local Chinese vendors are cutting its share at the low end, Tay said.

Its latest flagship products, the Galaxy S5 and Galaxy Note 4, are too similar to the previous generation, and gave consumers little new reason to buy them, she added.

Third place Huawei had an 11 percent share, while Lenovo had 9.5 percent of the market

Overall, China's smartphone market grew 19 percent year-over-year in the fourth quarter. But the high demand is tapering off, given that the year-over-year growth was once over 60 percent back in 2013, Tay said.

The country is the world's largest market for smartphones, but the market has been largely tapped. Instead, local smartphone makers such as Xiaomi and Lenovo are all looking outside the country to fuel further growth in their smartphone businesses.

Both IDC and Canalys are among the research firms that regularly track the Chinese smartphone market, but sometimes their market estimates can be significantly different.

"Research houses rely on various sources within the supply chain of the smartphone industry, and different players may give a somewhat different picture depending on how much they know," said IDC analyst Kiranjeet Kaur. Canalys analyst Nicole Peng said, "We cannot comment on other research firms number as we cannot know their source of information and methodologies."