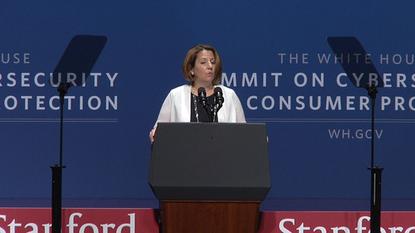 Lisa Monaco of the National Security Council speaks at the White House cyber summit in Stanford, CA, on February 13, 2015

Senior U.S. government officials came to Silicon Valley on Friday to deliver a direct appeal to executives from major companies and the cybersecurity industry: work with us so the nation will be better protected from cyberattacks.

The charm offensive, which includes a speech by President Barack Obama, comes as a new government agency is being formed to oversee preventive and reactive response to cyberattacks: the U.S. Cyber Threat Intelligence Integration Center. That's part of the government's response to the growing number of cyberattacks on large corporations, like Target and Sony Pictures, but the cooperation of industry is not guaranteed.

Lisa Monaco, a senior advisor to President Obama on homeland security and counterterrorism, said she worried that the type of cyberattack that targeted Sony could become the norm in the future if more isn't done.

Monaco's remarks came a couple of hours before President Barack Obama is expected to sign an executive order aimed at improving information sharing with the private sector.

But the order can only go so far and the government needs the goodwill of U.S. companies to contribute information on cyberattacks and breaches.

Kenneth Chenault, CEO of American Express, spoke on-stage with Jeh Johnson, Secretary of Homeland Security, and told him companies are looking for liability protection before they divulge information on cyberattacks and breaches to the government.

Goodwill has been something in short supply at some major Internet companies in the wake of the recent revelations on NSA spying.

Perhaps as a result, Facebook CEO Mark Zuckerberg, Yahoo CEO Marissa Mayer, and Google's Larry Page and Eric Schmidt, all declined invitations to attend and instead sent deputies, according to Bloomberg News.