Instead of just static 3D images, the new View-Master headset will provide an interactive 360-degree experience 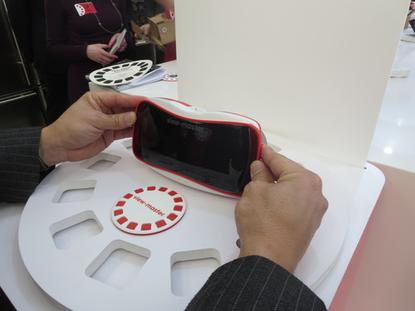 On a cold day in New York, Google and Mattel summoned warm memories of childhood when they unveiled a modern take on the iconic View-Master toy.

Instead of just displaying 3D pictures, the next-generation View-Master headset will allow kids to go on interactive virtual reality experiences such as 360-degree tours of planets, undersea adventures or fly-by tours of famous sites or cities.

The new View-Master is based on Google's Cardboard virtual reality technology, and stereoscopic video will be delivered through "experience reels." For example, users will be able to walk into Alcatraz to see what it's like, or take a short road trip around San Francisco. The virtual reality images combine photos and computer graphics.

"As I'm holding this thing, I'm thinking it's View-Master, but View-Master of the future," said Richard Dickson, president and chief brands officer at Mattel, at a New York press event Friday on the eve of the Toy Fair.

A Google team worked with Mattel to develop a product concept over about five months, Dickson said.

The first View-Master was introduced in 1940, and Mattel has ambitious plans for the new virtual reality headset. It plans to develop more interactive content, as well as longer videos, said Doug Wadleigh, senior vice president of global brands at Mattel.

Images for the new product are also being pulled from Mattel's old View-Master database dating back to 1940. It will also add more interactive games.

Stereoscopic reels can be purchased through a smartphone application. Mattel will also sell stereoscopic reels with virtual images for $15 each. The new View-Master initially works with Android phones, but eventually with iPhones as well.

Google's Cardboard, introduced last year, is a decidedly low-tech virtual reality kit. Users assemble cardboard into a headset, insert lenses in the viewfinder slot, and finally, put a smartphone in the front. Users can then view 3D images from Youtube, Google Earth and others via Google's Cardboard mobile app.