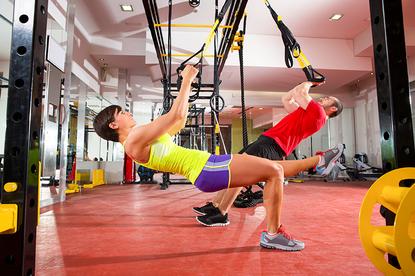 Under Armour is shelling out $US560 million to buy two fitness apps, giving it access to a mountain of data about health enthusiasts that it hopes will help it to sell more sportswear.

The maker of hoodies, running shorts and other athletic wear will pay $US475 million to buy MyFitnessPal, an app that helps people lose weight by letting them record what they eat and count calories. It's also paying $US85 million for Endomondo, an app from Denmark that lets people track their activity, whether that's running or doing gymnastics.

Combined with the fitness services it already owns, Under Armour says the deals give it access to "the world's largest digital health and fitness community", with 120 million registered users. And the more people log and share what they do, the more Under Armour will learn about them.

"It's a piece in the puzzle toward having a total picture of the athlete," said Kevin Plank, Under Armour's CEO, in a conference call Wednesday. That includes how much they sleep and exercise, what they put in their body and their nutrition needs, he said.

In today's data-driven economy that could be some very valuable data, and it steps up the competition with rivals such as Nike, as well as a myriad of technology firms tackling digital health.

Under Armour hopes to use the information to expand sales of its clothing, hiking shoes and other products. It "provides an opportunity to build long-term relationships with consumers, and ultimately we think we're going to sell a lot more shirts and shoes," Plank said.

Endomondo could help it grow its sales overseas, too, where more than three-quarters of the app's 20 million users reside.

Under Armour already operates an online health and fitness network called Record, where people can store data from popular devices like the Fitbit and Jawbone. It also owns the workout app MapMyFitness, which it bought in 2013. Those existing offerings have 31 million registered users, so the acquisitions will increase the number fourfold.

It wasn't clear how many of those are active, regular users, and the company didn't immediately respond to a request for comment.

Under Armour will have to be careful how it makes use of all that data. Government regulators have already signaled that they have concerns about how health data is used and shared with third parties for marketing purposes.

Under Armour completed its acquisition of Endomondo in January, and the MyFitnessPal deal is expected to close by the end of March, it said. The deals were announced with the company's fourth quarter earnings, in which sales grew by 31 per cent to $US895 million.