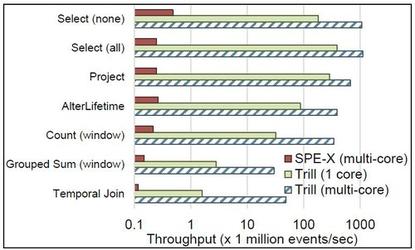 A streaming analytics engine developed by Microsoft Research is giving advertisers on the company's Bing Web search service more timely analysis on how their ad campaigns are faring, according to the company.

The streaming analytics engine, called Trill, can process data at two to four orders of magnitude faster than today's typical streaming engines, Microsoft said. The company plans to expand its use to other Microsoft computing services as well.

Trill functionality could be of interest to companies looking to analyze their data as it is streamed in from a live source, such as a social networking feed or live sensor data. Trill could compete with a new crop of open source stream processing engines built for these kinds of tasks, such as Apache Storm -- which was created by Twitter -- and Apache Spark.

Trill consists of a programming language designed for making temporal, or time-based, queries against data sets. The processing engine itself is a .Net library, allowing it to be easily embedded on Microsoft platforms. The library includes a set of techniques and algorithms for analyzing small batches of data in a way that is more efficient than other approaches, the researchers claim.

Most notably, Trill allows advertisers on the Bing service to see the results of a new ad campaign within an hour, down from the four hours it used to take Microsoft to present the results.