Your typing style could better protect your accounts

An intelligent keyboard can both charge itself and record unique typing patterns, which could be used for biometric authentication 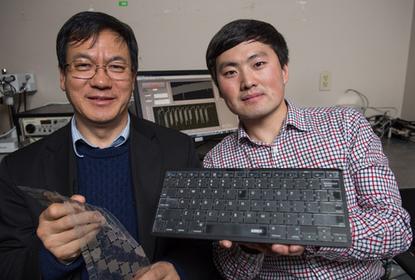 Georgia Tech Professor Zhong Lin Wang and graduate research assistant Jun Chen created a self-powered keyboard that can also be used for biometric authentication based on a person's typing style.

A new type of keyboard could make it irrelevant if your password is divulged, providing a much higher level of computer security.

Researchers with the Georgia Institute of Technology embarked on a project to create a keyboard that is powered by individual keystrokes, generating enough juice for a wireless connection.

They accomplished that, building an "intelligent" keyboard that captures a small charge produced when a person's finger touches a plastic material with a coating of an electrode material. That charge could be stored in a lithium ion battery, or used to send a wireless signal.

But during their work, they thought up another application that may have a far wider impact.

They had 104 volunteers type the word "touch" into their intelligent keyboard, which uses simple software to capture information on how hard a key was pressed and the time interval in which the keys were pressed.

It turns out those measurements are quite particular to an individual. Using signal analysis techniques, they identified unique typing patterns among people with a low error rate, a kind of biometric authentication.

Zhong Li Wang, a Regents professor in the School of Materials Science and Engineering at Georgia Tech, said in a phone interview from Beijing on Friday that the patterns become "a very unique personal measurement."

The intelligent keyboard was inexpensive to develop and uses off-the-shelf materials, Wang said. The keys aren't mechanical and are instead made up of vertically-stacked transparent film materials. Keystrokes produce a periodic electrical field.

His team is still working on making the keyboard more reliable, but he thinks it could be commercialized in as little as two years.

What if a person breaks a finger and the typing pace changes? Wang said that scenario could affect whether a person is able to access a system, and there might have to be a secondary authentication mechanism.

But the beauty of using the intelligent keyboard for passwords is that it would matter much less if cybercriminals had someone's login credentials, as they wouldn't be able to replicate the typing style.

The research was funded as part of a six-year grant from the U.S. Department of Energy to study nano power generation.