With HoloLens, Microsoft charts its own course for head-mount displays 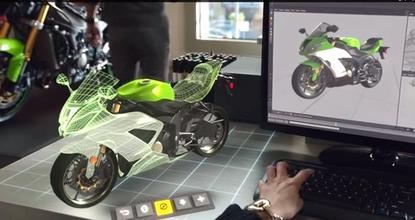 With its new HoloLens computer, which resembles a pair of ski goggles and displays holograms over the real world, Microsoft is taking a very different course from that pioneered by Google with Glass.

Given how Glass has been received, at least by consumers, that's probably a good thing.

"If you are in the head-mounted display business then, yes, I would think you would take into account what has happened with Google Glass," Gartner analyst Brian Blau said via email. "While a direct comparison isnt really fair, as HoloLens and Glass are really different products, I think that Microsoft will have a few key points to consider."

HoloLens, which debuted Wednesday during a Windows 10 event, displays high-quality images, an area where Glass has struggled, said Blau, who tried out the Microsoft device.

"In the case of Glass, the graphics fidelity is low, and I always felt that it was lacking in the category so much that the device would be limited by the type and amount of information that could be displayed," he said.

But as much as the experience looking through the device, the overall design of HoloLens is starkly different. It suggests Microsoft expects the product to be used in specific scenarios, rather than worn constantly, said Ian Campbell, CEO of Nucleus Research.

Given its obtrusive appearance, HoloLens isn't something people are likely to wear walking down the street. Glass, by contrast, with its minimalist design, was meant to be worn constantly. That raised privacy concerns, however, since it could be used to discretely record photos and video.

Those cultural issues, along with the high price tag and questions about its usefulness, may have contributed to Google's announcement last week that it was halting sales of Glass to the public.

"Google envisioned their device being perfectly normal for a person to wear out to dinner. Microsoft doesn't see that. On first pass, Microsoft is taking a much more targeted approach than Google," said Campbell.

The approach involves using HoloLens for certain tasks, principally in the home or the workplace Microsoft has shown it being used to make Skype calls, play immersive video games or control industrial design software.

"There's a market in business, gaming and consumer, but I think the market will be around specific tasks rather than the general approach Google took with Glass," Campbell said.

While some HoloLens apps will also work on Rift, the virtual reality headset from Facebook's Oculus VR, the way the two products are designed means the user experience will be different. Some may prefer to play games on Rift because it tracks user movement differently than HoloLens, said Blau.

"Im sure you'll see many apps that can cross over, but because HoloLens has a semi-opaque display and Rift has a fully immersive display, there will be many apps that just dont make sense on the other device," he said.

Microsoft must now get developers to create apps for HoloLens and, by extension, Windows 10, since the device is tied to the OS. Developers will also be keen to hear pricing and a release date for HoloLens, details Microsoft has yet to share.

"Developers will need more information before committing significant resources, especially volume manufacturing. Microsoft needs to sell a lot of units to entice developers, which means apps that are integrated with Windows 10," said Campbell.