The Upload: Your tech news briefing for Wednesday, January 21 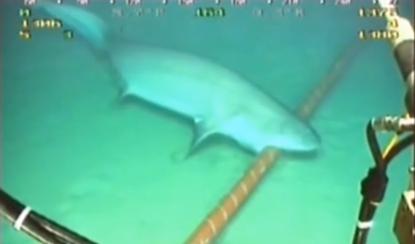 This frame grab from a YouTube video, which has garnered nearly 1 million views, shows a bluntnose sixgill shark biting a submarine cable.

All eyes on Redmond

It's Microsoft's big day with a major news briefing planned at company headquarters on Wednesday. What to expect: a new preview of Windows 10, a PC version of the Cortana digital assistant, better integration between Windows on the desktop and mobile devices, at least one new web browser, and more.

Ellison stepping out for Oracle launch

Larry Ellison will make one of his first appearances since relinquishing the CEO position, to launch some new hardware systems at Oracle headquarters Wednesday. Oracle says he's unveiling "the datacenter of the future" -- he's definitely still got his hands on the wheel.

IBM disappoints, in results and outlook

IBM did not cheer tech investors on Tuesday, with both a glum forecast for the year ahead and a quarter with lower profit and revenue for the year just closed. The fourth quarter was the 11th consecutive one in which IBM could not muster a year-over-year revenue increase. IBM is also looking to make acquisitions in the cloud space to fuel growth.

In the U.S. president's annual speech to Congress outlining his legislative agenda, Barack Obama went heavy on tech, promising to push for net neutrality rules and next generation broadband. He also called for more transparency in government surveillance programs and an array of cybersecurity measures.

AMD intends to shore up its position in the PC market with its new chip called Carrizo, slated to ship during the second quarter this year, CEO Lisa Su said during an earnings call on Tuesday. She said it will deliver the largest ever generational leap in performance per watt for the company's mainstream processors.

With emotions running high in Europe in the wake of terror attacks and arrests, officials in France and Germany Tuesday demanded that U.S. tech companies help them police terrorism on the Internet, says the Wall Street Journal. If Twitter, Facebook and Google don't pre-emptively remove terror content from their services, top law-enforcement officials want new laws that will force their hands.

Game developer Zoe Quinn, one of the original targets of harassment by the Gamergate movement, has helped found an organization aimed at combatting online abuse and helping its victims. The Crash Override Network is billed as an "online anti-harassment task force" run by volunteers who have experience in IT security, white-hat hacking, counseling and law enforcement.

Are sharks really attacking the Internet?

For the fourth time in a year, problems with the Asia America Gateway submarine cable system are causing trouble for Internet connections in Vietnam, and rumors are flying that sharks are the culprits. We get the real story.

Dropbox is continuing to expand its global footprint via acquisitions, picking up an Israeli developer of mobile tools this time. CloudOn's 30 workers will join Dropbox, which plans to use the Herzliya office as a base for regional hiring, the Wall Street Journal reported.

Humanoid robots hosted a press conference in Tokyo: see them chat with baby droids in video captured by IDG News.

Now that relations between the U.S. and its nearest Cold War adversary have finally warmed, what will it take to bring Cuba fully into the modern, high-tech era? Computerworld looks at the improvements the island nation needs to its electrical grid, wireless networks and IT workforce training.