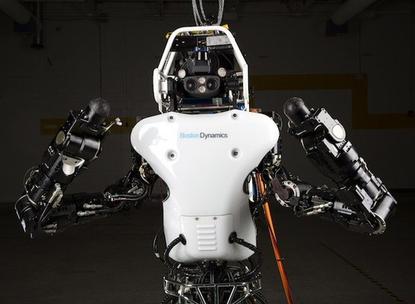 The U.S. military has upgraded its humanoid rescue robot, but the improvements highlight how far the machine has to go in order be useful in disaster zones.

Sponsored by the Defense Advanced Research Projects Agency (DARPA), Atlas is a bipedal platform for a robotics competition aimed a developing robots that can help humans respond to natural and man-made disasters.

While 75 percent of the humanoid robot is new, and it can now operate without the tether that powers it and protects it from falls, it is not independent.

A bulky new onboard 3.7-kilowatt-hour lithium-ion battery pack will only give the 1.88-metre-tall, 156-kilogram hulk "the potential for one hour of 'mixed mission' operation that includes walking, standing, use of tools and other movements," according to the agency.

That's far from what would be required to tackle a real-world emergency, with countless hazards and no means to recharge batteries.

Atlas' lower legs and feet were the only things carried over from the previous version. It now has lighter materials, improved actuators to help it get up after falls and repositioned arms so that it can see its hands in motion. Its wrists can rotate by themselves, allowing it to turn doorknobs without having to use its whole arm.

The other major improvement is a variable-pressure pump that helps with energy conservation and makes the robot a lot quieter, allowing engineers to work alongside it without hearing protection. The DRC teams will have to learn how to balance the force needed for various tasks with overall battery life, the agency said.

Engineered by Boston Dynamics, the new Atlas also has three computers for processing sensor input for task planning as well as wireless communication abilities. While performing DRC tasks, it will face communication blackouts of up to one minute each and it will have to operate without human intervention.

Up to seven teams will use the new Atlas in the DRC finals, slated for early June in California. A total of US$3.5 million is to be awarded to the top three finishers in the DRC.