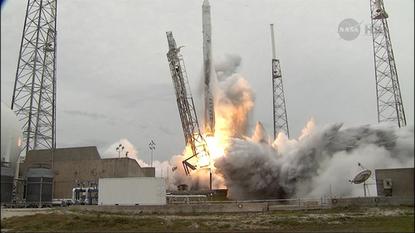 A Space X Falcon rocket lifts off from the Cape Canaveral Air Station in Florida on April 18, 2013

Google and SpaceX could be joining forces to beam the Internet from the sky after Google and Fidelity Investments together invested US$1 billion in Elon Musk's space venture.

Previous reports had said Google itself had invested roughly $1 billion in SpaceX, Musk's company that designs, manufactures and launches rockets and spacecraft. SpaceX has been looking to develop micro-satellites to provide Internet access, while Google has developed its own technologies like balloons to provide Internet service to underserved regions of the world.

Google and Fidelity now collectively own just under 10 percent of SpaceX, the Hawthorne, California-based company said Tuesday. The companies did not disclose what portion of the funding came from Google.

"This funding will be used to support continued innovation in the areas of space transport, resusability, and satellite manufacturing," SpaceX said.

Fidelity made the investment on behalf of its mutual funds, a spokesman said via email. The company will identify the funds and the size of the investment in Fidelity's next monthly disclosure of funds holdings, he said.