Intel's fourth-quarter earnings benefitted from a rebound in PC shipments 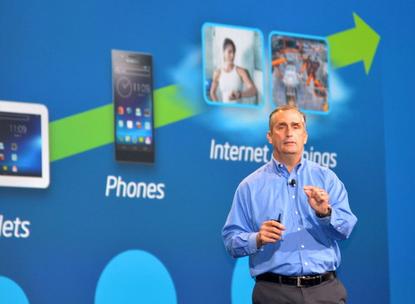 Capable, lightweight laptops are available these days for less than $200, and those prices are likely to stick around or even fall slightly this year, Intel says.

PC shipments are expected stabilize this year, and average prices for desktops and laptops may decline a little, said Brian Krzanich, Intel's CEO, during a conference call to discuss the company's earnings.

Thin-and-light laptops are delivering more bang for the buck than in previous years, and well-built, fully functional Chrome OS and Windows laptops are available for $US199 or less, Krzanich said.

But new innovations are also coming to PCs, and those may command a premium, he said.

For example, HP's Sprout desktop allows scanned 3D images to be manipulated on a digital canvas called the Touch Mat. The $US1899 PC has Intel's depth-sensing RealSense camera to capture the 3D pictures.

"The innovation and options in the PC market have never been stronger," Krzanich said.

PC shipments should be flat or down only slightly in 2015, Krzanich said. They declined in 2014, but at a slower rate than in previous years. In 2013 shipments declined by more than 10 per cent.

"It played out exactly as we forecast," he said.

Intel has benefitted from the stabilization. On Thursday it reported fourth-quarter revenue of $US14.7 billion, up 6 per cent from a year earlier and in line with analyst estimates. Net income was $US3.7 billion, up 39 per cent, while earnings were $US0.74 per share.

Last year wasn't the easiest for Intel, with chip delays hurting its revenue. After some manufacturing issues, Intel released new chips last week based on the Broadwell microarchitecture, which are now shipping in some laptops. But Broadwell will have a shorter-than-expected life in laptops and may not even reach desktops.

Intel is already promoting Broadwell's successor, Skylake, which will introduce wireless technologies that can replace cables for charging laptops and for connecting to monitors, printers and external storage. Skylake will be in PCs in the second half this year.

"We're not planning to slow down Skylake," Krzanich said.

Revenue for the Data Center Group, which sells server chips and components, was $4.1 billion, up a healthy 25 per cent. An emerging category for Intel is the Internet of Things, and that group's revenue was $US591 million [M], up 10 per cent year over year. Intel sells low-power chips, real-time OSes and security software for IoT installations such as smart cities.

Intel is projecting revenue for the current quarter to be $US13.7 billion, plus or minus $US500 million.