Intel's bought a foothold in tablets, but now it wants to cut its losses 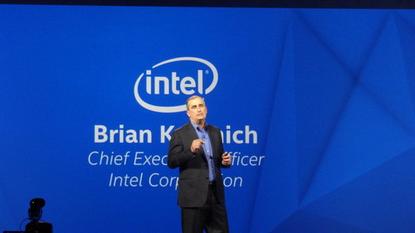 Intel shipped 46 million tablet chips last year, exceeding its own goal of 40 million, but don't expect the company to make such a commitment again.

This year, the chip maker wants to focus on making money on mobile chips rather than shipping large volumes, CEO Brian Krzanich said during a conference call to discuss fourth-quarter earnings.

Entering 2014, Intel was still struggling to make its mark in the tablet market, which was dominated by ARM. Intel set a goal to ship 40 million tablet chips and enticed device makers to use its low-power Atom processors by heavily subsidizing the chips. The company was effectively buying its way into the tablet market, but it lost millions of dollars in the process.

"This goal was intended to establish Intel Architecture in the marketplace," Krzanich said.

Intel's aggressive plan was criticized by rivals like AMD, which said it would rather focus on high-margin products than low-end parts. In September, Krzanich said he would not repeat such a program to put more of the company's chips in smartphones, a market Intel is still trying to break into. He repeated that during the Thursday conference call, saying the focus for tablet and phone chips will be on margins, not volume.

The tablet market is maturing, and analysts have forecast flat sales or slow growth. Krzanich said he can't predict tablet shipments, but unlike in 2014, Intel will not try to grow faster than the market with an aggressive chip strategy.

"We don't need to go out and outpace the market for this year," Krzanich said. "A key goal for mobility is to improve profitability."

Intel hopes to offset losses from 2014 later this year with new mobile chips code-named Sofia. The Sofia chips -- which will be cheaper to produce -- will go into smartphones and tablets, shipping first with a 3G modem and then with a 4G LTE modem.

"We've got several design wins," Krzanich said. "All of our major OEMs and partners and plus some."

Lenovo and Asustek are the most prominent mobile device makers that ship handsets and tablets with Intel chips. Intel has also tied up with Chinese companies Rockchip and Spreadtrum to develop and sell Sofia chips, which should reduce distribution costs and improve profitability. Rockchip is making a quad-core variant of the Sofia chip for low-cost mobile devices.

In 2014, Intel's deep pockets and factories made it possible for the company to sell tablet chips at low prices, or even for free in some cases. Many low-cost tablets and phablets with Intel chips were made by little-known hardware makers in Shenzhen, China.

The tablet market will develop much like the PC market, with both low-end and premium tablets finding buyers, Krzanich said. People will pay US$299 to $399 "if you bring the performance and capability that's new and innovative," Krzanich said.

One example could be Dell's $US399 Venue 7 8000, which is as thin as a smartphone and has a 3D camera. It runs on Android and has an Intel Atom chip code-named Merrifield. Intel later this year plans to release new mobile chips code-named Cherry Trail, which will bring wireless charging and data transfers to tablets.

Intel may have achieved its goal in the tablet market, but challenges remain in the smartphone market. Only a handful of smartphones have Intel chips, and it will take years to overtake ARM processors, which are in more than 90 percent of handsets.