The new phablet, called the Xiaomi Note, will arrive Jan. 27. 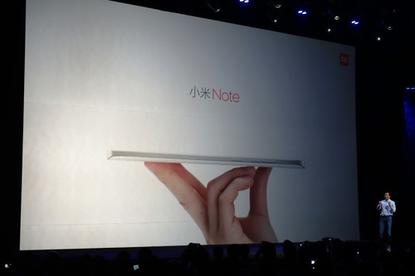 The Xiaomi Note is meant to be thinner and sleaker than the iPhone 6 Plus.

The latest Android handset from Xiaomi aims to overshadow Apple's iPhone 6 Plus, with a sleek design, cutting edge specs, and a starting price at less than half that of the competition.

The Chinese handset maker unveiled its new phablet on Thursday, calling the device the Xiaomi Note. It's meant to compete against other high-end big-screen smartphones. Xiaomi will be offering it in China on Jan. 27 for a starting price of 2299 yuan (US$376), when bought without a contract.

The 5.7-inch device is 0.15 mm thinner than the iPhone 6 Plus, and includes a back covering built out of glass that curves along the edges.

The phone has a 13-megapixel rear-facing camera, a 1080p display, and a Qualcomm Snapdragon 801 quad-core 2.5 GHz processor, along with 3GB of RAM. Built with 4G LTE connectivity and room for two SIM cards, it also has a 3000 mAh battery.

Xiaomi plans to offer a more powerful edition of the phone that will arrive in late March. It will come with the new Qualcomm Snapdragon 810 processor, 4GB of RAM and a 2K display, all for 3299 yuan.

Xiaomi has announced the new device at a time when phablets have become quite popular in China.

The company already offers another 5.5-inch smartphone, but it is for the lower-end market at a price of 899 yuan. That device has been a top selling phablet in China, which ranks as the world's leading market for big-screen smartphones with displays larger than 5.5-inch, according to research firm IDC.

"China leads the world, with more shipments of phablets than the next ten largest phablet markets combined," said IDC analyst Melissa Chau back in November. Part of the reason is because there are so many phablets in the local market from domestic vendors, and many come at low prices, Chau added.

For example, other big screen phones such as Samsung's Galaxy Note 4 and the Apple iPhone 6 Plus can cost consumers in China over twice the amount of Xiaomi's latest phablet.

Xiaomi's new phablet will help the company grow its ever-increasing market share. In last year's third quarter, it ranked as the world's third largest smartphone vendor, behind Apple and Samsung, according to IDC. The company mainly sells its phones in mainland China, but its been expanding rapidly outside the country to Southeast Asia and India.

Founded in 2010, the Chinese company has been on a quick rise that's disrupted the Chinese smartphone market. It's done this by selling products packed with cutting-edge components, but at low prices that have undercut the competition.

The strategy has paid off, attracting throngs of devoted fans in China while making it one of the hottest tech firms on the scene. But the company has also drawn controversy for allegedly copying designs from Apple and other electronics vendors.

For instance, the company's other flagship smartphone, the Mi 4, uses a metal frame that has drawn comparison to the aluminum design found in Apple's older iPhone 5.

In its defense, Xiaomi has said that all tech companies are constantly borrowing ideas from their competitors, including Apple.

"Point me to a product in our industry, a new product that came out that had completely unique design language. You're not going to be able to find one," said Xiaomi vice president Hugo Barra back in October.