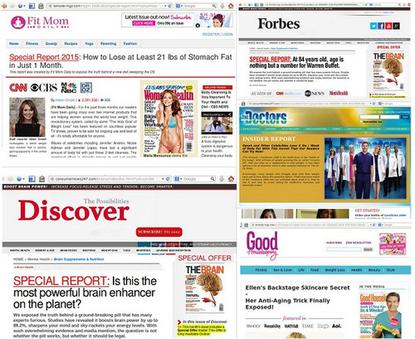 Webmasters figured out that malicious advertisements served by Google's AdSense were redirecting their users to bogus websites hawking spammy products.

When displayed, the malicious advertisements automatically redirected a person's browser to bogus websites. Those websites were designed to look like legitimate magazines such as Forbes and Good Housekeeping, featuring spammy offerings for anti-aging and brain-enhancing products, among others, Sinegubko wrote.

The attacks persisted since mid-December, spiking last Friday before Google apparently eliminated the malicious advertisements over the weekend, Sinegubko wrote. The problem generated a large number of questions and comments on Google's AdSense help forum.

The type of attack, known as malvertising, has been an ongoing problem for online advertising companies. Scammers will often submit non-malicious ads for approval then swap those out for malicious ones.

Google says that AdSense content is "reviewed by real people and clever machines" before appearing on websites. But the system doesn't appear to be foolproof.

In the AdSense support forum, Google moderators acknowledged the issue and said they were working to block the malicious ads.

Sinegubko wrote that the fake magazine websites were hosted on three domains, none of which show any content if viewed directly. The three domains were only just registered in mid-December, he wrote.

Some affected website owners figured out which advertisements were causing the problem. Banner advertisements that run on a person's site can be reviewed through an AdSense control panel called "Ad Review Center" and blocked if necessary.

Viewed through there, the malicious ads still redirected, giving webmasters a clue as to which ones were problematic.

Two campaigns were identified as malicious, although it was unclear if the accounts running them had possibly been hijacked by the scammers.

A broader issue is whether Google can control advertisements with third-party scripts that cause unauthorized redirects, Sinegubko wrote.

"If Google doesn't control scripts in their ads, AdSense may eventually turn into the largest malvertising platform despite of the still prevailing opinion that Google Ads are probably the most safe ad network out there," he wrote.