The Upload: Your tech news briefing for Monday, January 12 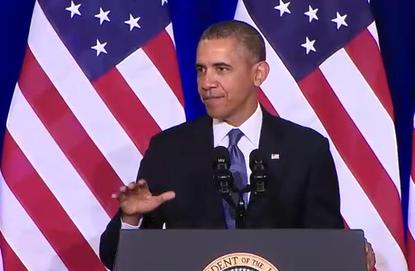 Online privacy and expression might be another a casualty of last week's murderous rampage at French satirical newspaper Charlie Hebdo: European interior ministers have issued a statement calling for faster reporting, and removal, of "material that aims to incite hatred and terror." They also agreed to go ahead with plans for the controversial European Passenger Name Record (PNR) framework that could make airlines share passenger data with governments.

Companies that suffer hacks compromising consumers' information may have to report them within 30 days under legislation that President Barack Obama is expected to unveil Monday. He also plans to submit a law to prevent tech companies in the education sector from profiting from student data.

Alibaba may be eyeing India investment

Chinese e-commerce giant Alibaba isn't commenting on a report that, along with its financial services affiliate, it's going to invest about $575 million to take a 30 percent share in India's One97 Communications, the Wall Street Journal reports. New Delhi-based One97 is in online payments and e-commerce.

Ross Ulbricht, allegedly the mastermind known as "Dread Pirate Roberts" behind the Silk Road online marketplace that became an e-commerce outlet for illegal drugs and malware, will have his day in court. Jury selection in his trial starts Tuesday in New York.

Elon Musk's attempt to recycle the booster stage from the latest SpaceX rocket launch failed this weekend, the Wall Street Journal reports. The cargo capsule went off to the International Space Station without a hitch, but the booster didn't make it neatly onto a floating platform to be reused, as Musk had hoped.

U.S. telco Verizon took customers of its Verizon Cloud service offline for maintenance early Saturday, and as the outage stretched from a hoped-for 24 hours well into Sunday, Twitter was full of pointed commentary -- and offers to move customers to AWS, Azure, and the like.

Google is getting ready to announce improvements to its translation app for Android phones, the New York Times reports. The app will automatically recognize if someone is speaking a popular language, and turn it into written text.

Optical submarine repeaters are big missile-shaped devices that lie along undersea cables carrying nearly all of the world's Internet traffic. Tim Hornyak from IDG News Service captured this inside view from the NEC plant that makes them.

Unbundling TV content is a big topic in the U.S. as consumers "cut the cord" from cable services and find their favorite shows a la carte online. Sounds great -- but might viewers be in store for price increases down the road? The Upshot draws parallels with unbundling in air travel to suggest that there may be a downside for customers.