Adoption of the social networking site among U.S. adults 65 and older keeps growing 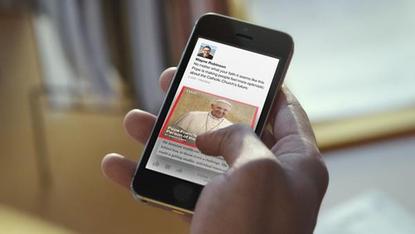 In Facebook's new Paper app, stories appear to unfold as they are opened

If some kids are turned off by Facebook because their parents are on it, now they might be even more horrified: Grandparents are flocking to the social networking site.

For the first time, more than half of all online adults 65 and older in the U.S. use Facebook -- 56 percent specifically -- according to a Pew Research Center survey. That represents 31 percent of all seniors, according to Pew, which surveyed 2,003 American adults by cell and landline this past September.

On the whole, Facebook saw little change in its membership from 2013 to 2014, Pew said, but the rising adoption among older adults was an exception.

"We know from previous research that social networking sites provide seniors with links to social support and that they value the way social media helps them to say connected to friends and family," said Lee Rainie, director of Internet, science and technology research at the Pew Research Center. Pew released other findings last year showing that seniors are increasing their use of the Internet overall.

And, while some older adults might not initially understand the benefits of joining social media sites, as social media use becomes more common, seniors may have more friends and family who can help them overcome technology barriers, Rainie said.

Then there are seniors who are tech savvy.

"I have long been into media of all kinds, led there by my digital approach to Shakespeare," said Richard Regan, a retired English professor who taught Web-enhanced courses that incorporated streaming video of different Shakespeare plays.

However, he added that Facebook -- and Apple's FaceTime -- helps him keep in touch with family and friends.

To be clear, Facebook is still the most popular social network, with 71 percent of all Internet users on it, but that level of usage is unchanged from 2013. Other services like Twitter, Pinterest and Facebook-owned Instagram saw healthy growth in usage between 2013 and 2014, according to Pew.

Also, 28 percent of online adults use LinkedIn, up from 22 percent in 2013, with college grads continuing to dominate use of the site. Plus, for the first time, the share of Internet users with college educations using LinkedIn reached 50 percent.

Clearly, there's an awful lot of social networking going on. And more adults are multi-tasking, with more than half using two or more social media sites, Pew said Friday. But Facebook still acts as "home base" -- it's the most popular site for people who use only one site, and has significant overlap with other sites. There are more Facebook users now who also use Twitter, Instagram, Pinterest and LinkedIn, Pew said.

And while Facebook helps many people keep in touch with family and friends, some of those "friends" might get short shrift. The median number of Facebook friends is 155, Pew reported, but when asked to approximate how many of their Facebook friends respondents considered to be "actual" friends, the number dropped to 50.

Pew said its survey had a margin of error of plus or minus 2.5 percentage points.