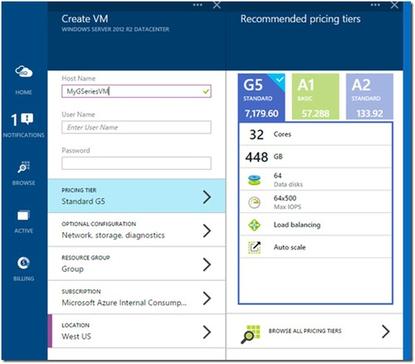 Microsoft continues to bulk up its Azure cloud platform, adding a secure key vault for protecting cloud workloads as well as a new set of larger virtual machines and an easier way to deploy Docker-based workloads.

Collectively, the new services could "enable simple and affordable solutions while still offering cloud-scale capabilities," said Corey Sanders, Microsoft partner director of Azure program management. Enterprises can "write applications that scale and the cloud will scale with them."

The new Azure Key Vault provides a place where organizations can store cryptographic keys, which are used to encrypt data and store passwords.

Today, such keys are typically stored on Hardware Security Module (HSM) appliances. These key repositories can be difficult to manage and could have trouble responding to a high numbers of key requests should traffic spike, Sanders said.

The Azure Key Vault was designed to address these issues: It can scale easily as additional traffic comes in, and new vaults and keys can be provisioned in a matter of minutes, Sanders said.

The service's keys meet the encryption specifications set by the U.S. government's FIPS (Federal Information Processing Standard) 140-2 level 2, a cryptographic requirement for federal agencies and is widely adopted by organizations as well.

Initially, the service, accessible as a preview, is available in selected regions in the U.S., Europe and Asia, with availability in additional regions to be added shortly.

The G-series offers up to 32 virtual CPUs, 448GB of memory, and 6.59TB of local solid state drive (SSD) memory. Up to 64 1TB disks can be attached to each virtual machine.

These beefy virtual machines would be ideally suited for running Hadoop data-analysis jobs, or for high-volume NoSQL databases such as Cassandra or MongoDB, Sanders said.

Microsoft is also making it easier to spin up complex, distributed workloads, through a new package dedicated for running Docker containers. Launched in 2013, Docker is rapidly growing in popularity, thanks to the ease it offers in ramping up and shifting workloads around in the cloud.

"It pieces together the technologies of Docker and Ubuntu, making it very easy to get started with Docker," Sanders said.

With the new announcements, Microsoft also took the opportunity to tout Azure's growing popularity. The service is now experiencing more than 10,000 new customers a week, according to the company.

Microsoft does seem to be gaining ground. About 21 percent of chief information officers chose Azure as their "preferred cloud provider," up slightly from 20 percent a year ago, according to a survey of 112 CIOs issued this week by investment bank and asset management firm Piper Jaffray.

The company still trails chief rival Amazon Web Services, which was the preferred provider of 35 percent of CIOs in the same survey. But Azure is pulling ahead of Google's cloud platform, which was the favorite of only 7 percent of CIOs, down from 12 percent a year ago, despite a heavy marketing push from Google.