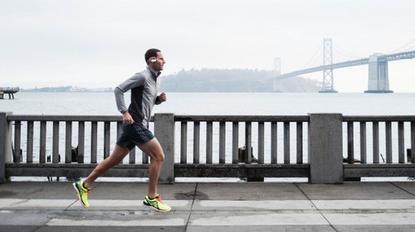 Sony is trying to get runners to ditch their smartphones and fitness bands with a motivational headset device it calls the Smart B-Trainer.

Shown off at CES 2015 in Las Vegas this week, the concept gadget consists of two rather clunky headphones joined by a loop around the back of the head, not unlike Sony's waterproof Walkman Sports MP3 Player.

While the prototype can't take calls like some smartwatches or an iPhone running a jogging app, it's hands-free and dedicated to combining music and running. It's equipped with a heart rate monitor and a GPS module to track performance and location as well as on-board music storage.

"Not only does it keep your running log, it also selects a tempo that guides and supports you through your preselected training menu to achieve the goals that you set such as fat burning or improving endurance," Sony Electronics President Mike Fasulo said during a Sony press event Monday evening at the Las Vegas Convention Center.

Aside from automatically selecting songs with tempos that match a runner's heart rate, the unit plays prerecorded "vocal advice" that sounds like a female coach to get runners to give it their all.

As seen in a promo video on YouTube, the coach says things like "Your heart rate is too high" and "Training finished. Good job!"

Sony did not provide any further details about the concept model, which is being demoed with runners on a treadmill at Sony's CES booth.

The Smart B-Trainer is part of Sony's SmartWear lineup that includes the Google Glass-style Single-Lens Display Module, which was unveiled in December. Also known as SmartEyeglass Attach!, the prototype features a vivid but unobtrusive OLED microdisplay with a resolution of 640 by 400 pixels.