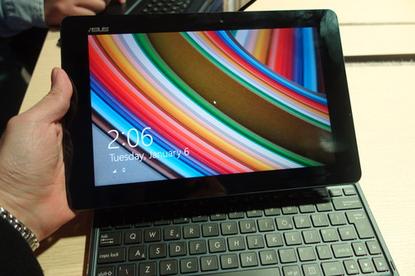 Asus took a jab at the MacBook Air and iPad with three new PC convertibles it claims offer better design and performance. Unfortunately, the products fall a tad short of offering the premium feel found in competing Apple devices.

We went hands-on with the Asus Transformer Book Chi series, which was unveiled on Monday in the run-up to the International CES show. Available in three different models, the products are essentially tablets running Windows 8.1 but are equipped with an attachable keyboard.

All three units were black and were made of aluminum, giving them a smooth and sturdy feel. Apple uses the same material in its products. But the devices from Asus start to feel cheap once attached to their keyboards, which appear to be made out of plastic.

During Monday's unveiling, Asus boasted about the thinness of the three devices, which range from 7.2mm to 7.6mm thick in tablet form, without the keyboard. That's slightly thicker than an iPad Air 2, which is 6.1mm thick. But with the keyboard attached, the top-of-the-line Transformer Book Chi T300 was thinner than a MacBook Air: 16.5mm versus 17.5mm.

The most impressive of the three Asus products is the T300, which is also the most expensive. It has an eye-catching display: The resolution is at 2560 by 1440 pixels, and colors really pop from the screen. That screen comes with the high-grade, $799 version of the product. There's also a $699 T300 with a less brilliant 1920-by-1080-pixel screen.

Unlike the other two models, which use Intel Atom processors, the T300 features Intel's latest Core M chip, which was specifically designed to run in ultra-thin tablets. These processors are meant to bring PC-level performance to tablets while still offering long battery life.

In our brief time with the T300, we found that the device ran quite fast and at the same time kept cool. However, the T300 started to warm up when it was attached to a power cable. When the battery ran low and power management features kicked in, the system noticeably slowed. Movies started to stutter and Web-browsing response dragged. Asus claims the T300 will offer up to 8 hours of battery life.

In tablet form, the T300 feels fairly light and is easy to hold, despite its large 12.5-inch screen. It weighs 720 grams, and the tablet can easily hook back onto the Bluetooth-enabled keyboard with the help of magnets. Once it's attached, the tablet-turned-laptop can open about 120 degrees wide.

Although the keyboard may hurt the feel of the T300, having the accessory definitely makes it more productive. On the keyboard is a trackpad, which made the T300 easy to use when switching to Windows 8.1's desktop mode.

Along the opposite edges of the tablet are two thin audio speakers. They offered adequate sound but nothing impressive. The tablet also contains a micro-USB and HDMI ports.

The two other Chi models, the T100 and T90, have the same basic design but are smaller and less powerful.

The smaller T90, which has an 8.9-inch screen, was more problematic.

While the T90 is cheaper at $299, its keyboard is hard to use. There is no trackpad on it, and the tablet is not attached with the help of magnets, but by simply shoving it into a groove along the keyboard's edge. That grooved connection didn't always hold, so the tablet tended to fall down.

We also weren't impressed with the device's screen, which has a 1280-by-800-pixel resolution. Colors were dim even with the brightness turned all the way up. The small screen also makes the device difficult to use when the tablet is switched into Windows 8.1's desktop mode. Some icons were hard to touch simply because they were so tiny.

The products may be far from perfect, but they come with relatively low prices that could entice some users to give them a try. The Transformer Book Chi devices will arrive in February and will come with the attachable keyboards included.