The Transformer Book Chi tablet-laptops will arrive in February 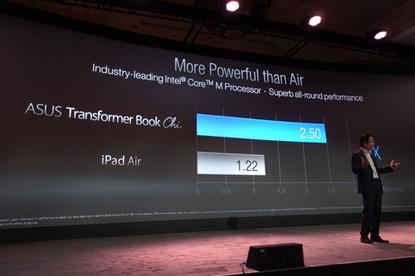 The new ultra-thin Transformer Book Chi convertibles are a better option than Apple's Macbook Air and iPad Air, according to Asus, which will start shipping the hybrid tablet-laptops next month.

The Chi series will come in three different models, all running Windows 8.1 and each with an attachable keyboard.

"Our Chi is thinner than air," Asus chairman Jonney Shih said Monday at the International CES show in Las Vegas, making a play on words to allude to the Apple products. During his presentation, Shih compared and contrasted the new Asus convertibles with the Macbook Air and iPad Air.

Inside the T300 is Intel's latest Core M processor, which are low power consuming chips intended to bring PC-like performance to tablets.

Shih claimed that the T300 model can offer twice the level of processing power over the iPad Air, according to Asus' own internal performance benchmarks.

The T300 was first unveiled back in June at the Computex Trade show in Taipei. On Monday, Asus said the product will arrive in February and cost US$699 for the 4GB RAM model, and $799 for the 8GB model.