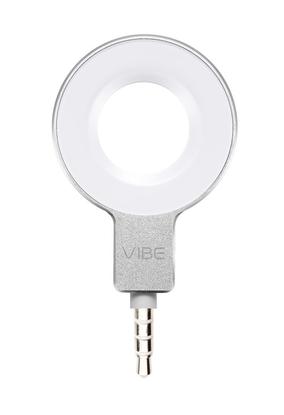 Lenovo has masterminded a string of new selfie features in its new Vibe X2 Pro smartphone, for those who want to look sharper in their self-portraits.

A flash accessory that Lenovo calls the Vibe Xtension Selfie Flash generates extra light when shooting selfies. The circular accessory plugs into the Vibe X2 Pro, has eight diffused LED bulbs, and activates when shooting a picture from the smartphone.

The Vibe X2 Pro has a 5.3-inch high-definition screen and a 64-bit Qualcomm 615 octa-core processor. The LTE smartphone weighs 140 grams and has a larger screen than the 5-inch Vibe X2, announced in September. The X2 Pro will ship in April, and pricing information was not immediately available.

Users can enjoy 100 selfies on a single charge with the Xtension Selfie, Bond said, adding that the accessory is "featherweight" and easy to carry in a bag or pocket.

Right now the selfie accessory is for use with the Vibe X2 Pro, debuting at International CES in Las Vegas this week. It will be sold separately. But there's a chance it could be introduced for other Lenovo and Android smartphones.

"The plan is to expand its functionality across the range of Vibe phones and possibly other Android devices. However, we have no current timeline in place for that," Bond said.

Other X2 Pro features include 32GB of storage and 2GB of RAM.

Lenovo also introduced the new P90 smartphone, a 5.5-inch smartphone with an Intel Atom Z3560 processor. It has LTE capabilities, a 13-megapixel rear camera, 5-megapixel front camera, 2GB of RAM and 32GB of storage. It has a 4000 milliamp-hour battery, which should give it days of battery life. The P90 will ship in February, though pricing was not immediately available.

Lenovo is the world's largest PC maker and third in tablets, but sees space to grow in smartphones. The company has a strong smartphone presence in China, and last year acquired Motorola Mobility from Google to expand in the U.S. The company has hinted that it would ship only Motorola smartphones in the U.S., so it's likely the Vibe and P90 smartphones will initially be available in Asia and Europe.