Many consumers are in the dark on how their data is used, the regulator said 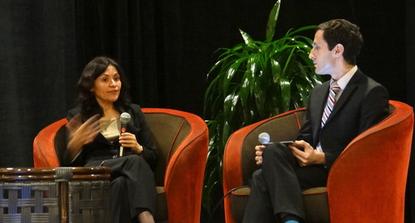 Online service providers need to do a better job telling users what information will be gathered about them and how it will be used, a top official at the U.S. Federal Trade Commission said Wednesday.

"It's crucial to provide some form of notice, like in the initial set-up of a device or app, about what information is collected, how it's used, and with whom it's shared," said Edith Ramirez, chairwoman at the FTC.

Companies collect a staggering amount of personal data via apps and online services, and they're doing so in in increasingly sophisticated ways. But most people still don't understand what data is collected, and cryptically-worded privacy policies don't help.

That lack of knowlege makes it hard for people to look out for their own interests, Ramirez said.

"One reason consumers don't appreciate the risk is that they're not in a position to fully understand what's taking place," she said, referring to the lack of transparency about what data is being collected.

"Consumers don't appreciate what's going on. It's an issue that needs to be addressed," she said, speaking during a conference on digital privacy in Palo Alto, California.

The FTC has acted against companies for their data collection practices before, with Snapchat being a prime example.

Others at the event proposed measures to help protect people's privacy, some of them very straightforward.

Fatemeh Khatibloo, an industry analyst at Forrester, said that after she downloaded a hotel app to her smartphone, it reminded her that if she saved her log-in credentials in the app, other people would be able to access the Internet using her account if they picked up her smartphone.

There's no reason other apps shouldn't provide similar notifications in a clear and up-front way, she said.

Others recommended services that provide some added security. Glimpse, an app that should be widely available soon, offers disappearing photos like Snapchat but has end-to-end encryption built in. Another company demoing at the show was Virtru, which says it adds an extra layer of encryption to the email service you already use, like Gmail or Yahoo Mail.