The Microsoft and Motorola smartphones are powered by the same processor, and cost about the same 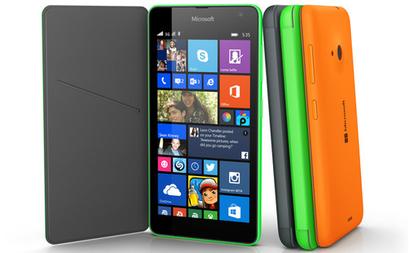 The Lumia 535 has a 5-megapixel front camera.

With the Lumia 535, Microsoft has delivered a worthy successor to the successful 520 that stacks up well against tough Android competitors like the Motorola Moto E, which the smartphone beats on several fronts.

The two devices cost about the same -- the Lumia goes for US$135, while the Moto E costs $130 before taxes and subsidies -- pack the same processor and are good options for buyers looking for an affordable smartphone without a contract.

However, the Lumia 535, which arrives after the disappointing Lumia 530, offers more storage and a front-facing camera, which the Moto E lacks altogether. As is the case with all Windows Phone devices, the Lumia 535's main drawback compared with Android smartphones and iPhones remains third-party app selection.

Here is a detailed spec comparison between the two:

The smartphones are powered by a 1.2GHz dual-core Snapdragon 200 processor, which is Qualcomm's entry-level processor. I have used the Moto E for quite a bit, and have rarely been bothered by its performance. The same should be true for Lumia 535.

Part of the reason why the phones don't need a more powerful processor is because neither has a high-resolution screen. They have the same resolution -- 960 by 540 pixels -- but the screen on the Lumia 535 measures 5 inches while the Moto E has a 4.3-inch screen. Five inches is about as far a qHD screen can be stretched and still get a good result.

One of the most important additions Microsoft has made to the Lumia 535 compared to its predecessors and the competition is a wide angle 5-megapixel front camera. The camera is the same Microsoft has used on the more expensive Lumia 730 and 735. The Moto E, on the other hand, doesn't have a front facing camera. Both devices have a 5-megapixel main camera on the back.

The weight of both products highlights the compromises vendors have to make when they develop low-cost phones. For example, the G3 from LG Electronics has a 5.5-inch screen and weighs 149 grams. But in the end that doesn't matter much to me; anything below 150 grams is perfectly manageable.

That Microsoft launches the Lumia 535 so soon after the arrival of the weak Lumia 530 shows the company is serious about making a go of Windows Phone in the low-end smartphone market. However, there is little doubt the company and Windows Phone will struggle to compete with Android. The availability of apps has improved, but is still an Achilles heel.

The Lumia 535 will start shipping in November, and arrive to the U.K. during the first quarter next year. For now, there is no U.S. launch date.