The big jump in screen size and the higher cost are the main reasons enterprises shun the Plus, says an analyst 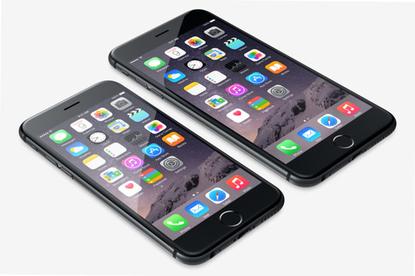 Apple announced on Monday that it sold ten million iPhone 6 and iPhone 6 Plus models combined after the first weekend of availability—a new record for launch weekend iPhone sales.

Enterprise smartphone users were almost six times as likely to get an iPhone 6 as the larger Plus model, according to data from enterprise mobility vendor Good Technology.

September saw the introduction of many new smartphones, but the launch of Apple's iPhone 6 with its 4.7-inch screen and the iPhone 6 Plus with a 5.5-inch screen was arguably the biggest of them all.

Despite not being available for the entire month, the iPhone 6 models made up 17 percent of all of Good's September activations, according to the company's Mobility Index report for the third quarter. Eighty-five percent of those were activations of an iPhone 6, whereas only 15 percent were of an iPhone 6 Plus, Good said.

"You have to think that the leap from 4 inches to 5.5 inches was a bit too much for some of the iPhone faithful. It's a big step up," said Nick Spencer, senior practice director at ABI Research.

Other potentials reasons for the smaller model dominating sales include lower cost and an unwillingness to develop in-house iOS apps for too many screen sizes, according to Spencer. Apple's share of all activations was 69 percent compared to 29 percent for Android and 1 percent for Windows Phone.

The split between the iPhone 6 and iPhone 6 Plus isn't too far off where the total market for 2014 will end up. Devices with a 5.5-inch screen size or larger are expected to have a 14 percent share of total smartphone shipments during 2014, according to IDC.

The report also shows how mobility is becoming important to enterprises, which are building more of their own customized apps. Custom app activations more than doubled quarter over quarter and grew by over 700 percent year over year, becoming the most widely activated app category, according to Good.

The report highlights how smartphones and tablets are used differently among Good's enterprise users, as well. Smartphones are primarily used for communication and to get quick access to information, while tablet users are using their devices for more involved document access and editing.

Good's Mobility Index report for the third quarter was based on data from about 6,000 companies around the world, the company said.