“If your business is not doing so well I’m afraid that’s down to leadership because they are so many opportunities for you to go after.” 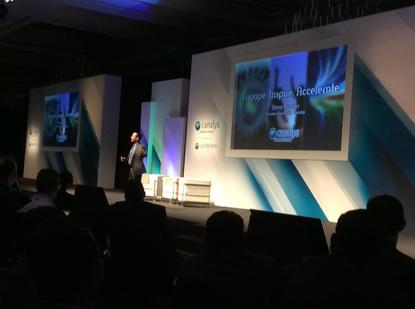 Speaking as President and CEO of Canalys at the Canalys Channels Forum in Shanghai last week, Brazier addressed an 800-strong room of vendors and channel players with the enthusiasm befitting a healthy industry.

“The channel is really healthy,” he told delegates. “More than 45 per cent of the channel partners sat here will grow by at least 10 per cent in revenue during Q4.

“The vendors don’t need to tell you how to change because you’re doing a great job of rolling with the market.”

Claiming that the situation will get “even better”, Brazier, who has headed up the analyst firm since its founding in 1998, did however have strong words of criticism for partners failing to turn a profit.

“If your business is not doing so well I’m afraid that’s down to leadership,” he explained, “because they are so many opportunities for you to go after.”

According to Brazier, who specialises in research areas including mobility, IT infrastructure and channel strategy, the channel is going through a period of “extreme change”, citing recent examples of disruption within the industry.

“We’ve heard EMC mention the importance of flash storage and how quickly that has come up to the first tier of storage,” he said. “And in Wi-Fi, we’re seeing the rise of AC technology as well as software-defined everything.

“Whether that be software-defined storage, data centres, networking, this market change is creating more value for those who can sell such products.”

And for the industry critics who claimed there is no future in hardware, Brazier, in discussing distribution channel trends across the APAC region, was quick to banish such claims.

“Apple makes nearly all of its revenue from selling hardware,” he explained, “which proves there’s money to be made in hardware providing you’re in the right space.”

While heaping praise on the efforts of the channel partners, Brazier also noted the growing such of distributors, citing an acceptance of the two-tier distribution model as the key driver.

“Some of the reasons why distributors are doing well is because the distribution model has won,” he claimed, “the two-tier model is the de-facto standard.

“Dell is now doing all it can to develop a two-tier distribution model around the world while a few years ago EMC committed to that space.

“And then also the other part is that distributors have moved into mobility very well. So yes, we’re in an industry that’s in good shape.”

The industry as a whole is witnessing few acquisitions than in previous years, with Brazier citing the slowing down of big vendors acquisitions, by around 30% year-on-year, as the main factor.

“That’s probably because start up valuations have simply been too high most acquisitions have been unaffordable,” he explained.

“So instead we’ve witnessed a change, we’re seeing several vendors starting to get smaller.

“IBM has sold off its X-Series business to Lenovo, while HP and Symantec have both split into two, signalling a move from companies getting bigger and bigger to more focused and leaner.”

Of course for every trend there are counter-trends, with the expanding Lenovo, who recently closed IBM and Motorola deals, and Microsoft, who purchased Nokia earlier this year, bucking the trends.

But while acquisition rates slow, Brazier spoke of a recovering PC market, a market significantly boosted by the spate of Windows XP upgrades across enterprise during the first half of 2014.

“We didn’t expect the PC market to do quite as well this year,” he added, “which again shows there is still money to be made in selling PCs.”

But as the regional channel markets progresses, the relationship between China and the rest of Asia has become more complicated on a political scale but also in terms of the technology industry.

Many of the vendors in the US, according to Brazier, have seen their business decline in China; “hence why the vendors aren’t growing as well as the channel partners,” he explained.

“There is a serious split emerging between China and the rest of Asia.

“Both HP and Cisco have already segmented China out of its Asian organisations and into an independent business which is making life complicated for the distributors who operate across the region.”

Citing political reasons as well as other determining factors, Brazier believes because China is doing a good job of developing its own standalone industry separate from the US, a split was always on the cards.

“This is happening across a lot of areas,” he added, “just look at Lenovo and the other successes coming out of the country like Alibaba also.”

As a result Brazier says the channel is witnessing the emergence of a parallel industry, mostly in China.

“This means new competition,” he added, “which is bad news for some vendors but good news for the channel.”