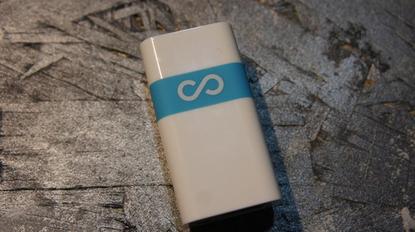 Lima's upcoming device for file sharing between all kinds of devices.

French startups such as Lima, Pydio and Infinit are taking a more privacy-centric approach to file sharing with offerings for consumers as well as organizations.

The growing popularity of online storage and file sharing services such as Dropbox puts the technology on a collision course with CIOs, who want to remain in control of enterprise data, and raises increasing privacy concerns after revelations about U.S. government snooping on such services.

Lima, Pydio and Infinit -- which are all taking part in the Web Summit conference in Dublin -- see this as an opportunity to offer products that address these concerns and offer better performance.

Pydio offers an open source platform for file sharing and synchronization that's hosted in a company's own datacenter.

"The idea is to take back control of the data," said founder Charles Du Jeu.

One of the benefits of the platform is that it's storage agnostic, letting companies take advantage of their existing storage system as well as servers to help keep the costs down. Pydio's platform can also be connected to Active Directory and LDAP directories for user authentication.

Users can still access and share their files via native mobile apps or using desktop synchronization. Next month Pydio is planning to release a big update that will improve the Web access user interface and add more features for sharing files, according to Du Jeu.

The enterprise version of Pydio's platform costs about €800 (US$1,000) per year for 100 users, according to the company's website.

Another company, Infinit, has taken a different approach to file sharing by basing its free application on peer-to-peer technology in order to improve speeds.

"We are between five and 30 times faster than cloud-based solutions, and there is no limitation on the file sizes," said Baptiste Fradin, co-founder and chief operating officer at Infinit.

Privacy is improved because there are no central servers and the files are encrypted end to end.

On Mac OS, users just have to drag the file or folder they want to share to the Infinit icon on the menu bar and the pick the recipients from images or a menu that drops down. The company also offers a Windows client, although that's still in beta.

These days, mobile apps have become a must, and Infinit will have its own early next year, it announced on Tuesday at Web Summit. For now, the company is targeting in creative sectors that handle large files, according to Fradin. After being available for about three months it has about 50,000 active users.

However, it isn't just professional users that want control of their storage and file sharing, according to Lima, which is developing a product for home use. It's attached to a broadband connection and a USB storage device.

"The product makes sure that whatever computer, tablet or smartphone you use, you always get access to the same files. We are trying to end the problem of not knowing where your files are," said Séverin Marcombes, CEO at Lima.

A change on one device is directly echoed on all others. Having the device at home improves performance, and lets the user retain control of their data, according to Marcombes.

The product will start shipping next spring and can now be pre-ordered on Lima's website for $110 including shipping.