Michael Dell gets his payback, slams 'turmoil' at HP and IBM 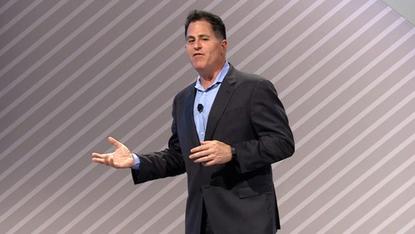 What a difference a year makes.

For much of 2013, while Michael Dell was fighting a costly battle to take his company private, his rivals played up the distraction and did their best to lure his customers away. Now the shoe is on the other foot.

Michael Dell opened the Dell World conference in Texas on Tuesday and, looking decidedly relaxed and pleased with himself, wasted no time denouncing the "turmoil" his rivals in the industry are going through.

"They're splitting away businesses, spinning off pieces of their businesses, and one has to ask the question: who is this for? Does this actually help the customers? Does it help them create the next great innovative products?"

You can't begrudge him a bit of schadenfreude. Just six months ago Meg Whitman was calling Hewlett-Packard a "paragon of stability" compared to its rivals and now she's breaking the company in two. And IBM is selling its x86 server business to Lenovo and fighting to keep its profits above water.

Dell became a private company almost exactly a year ago, and Michael Dell doesn't have to worry about those quarterly targets any more. He said that allows Dell to invest in better products and growing its business.

Dell can focus on a future that's "beyond the next quarter, the next year or the next shareholder activist," he said, perhaps thinking of Carl Icahn, who made him pay millions more to take his company private.

It also means that Dell's financial results are no longer public, so it's hard to know how its business is really doing. Dell's PC shipments grew almost 20 percent in the U.S. last quarter, Michael Dell said, faster than those of HP and Apple.

That's correct, according to IDC, though Lenovo and Acer grew more on a global basis, and Dell still trails HP in the U.S. and worldwide.

Still, Dell is clearly investing in new technologies. On Wednesday it will announce a new "converged infrastructure" system called the PowerEdge FX, he said, which combines servers, network and storage in a new design that offers "the most density in the world."

It's also investing in services, and launched the beta of a "cloud exchange" last week that will give businesses a place to select and sign up for cloud infrastructure services. He also touted recent partnerships with VMware and Microsoft's Azure for private cloud deployments.

Michael Dell isn't the most relaxed or emotive speaker as a rule and this was a candid display for him, even taking questions from reporters in the audience. His enthusiasm was tempered when someone asked him why, if Dell is growing so much, it had to lay off some of its employees this year. He said his company needed less people in some parts of the business but more in others, and that Dell is actually hiring engineers and salespeople despite the job cuts.

With Apple's Mac shipments growing fast, PCs don't look like such a dire industry to be in any more, at least compared to recent years. That's lucky for Dell, which still gets a huge chunk of its revenue from desktops and laptops, even as it tries to expand its more profitable businesses.

"We still believe the PC is how real business gets done," Michael Dell said.