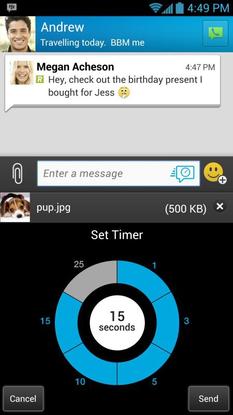 Taking a page from the Snapchat playbook, BlackBerry will let BBM messaging service users control how long messages and pictures can be viewed, hoping the feature, along with other new capabilities, will result in a new revenue stream.

The BBM upgrade will be available for BlackBerry's own smartphones as well as for Android and iOS over the next couple of days. The company didn't say when the Windows Phone version would be updated.

By setting a timer, users control how long messages and pictures can be viewed by their contacts. The new BBM message type is hidden until the recipient touches and holds on the chat. Then, once the timer has expired or when the recipient takes their finger off the screen, the message is gone, according to BlackBerry. The user also receives a notification if BBM detects that a screenshot of the image or message has been taken.

BlackBerry has also added a feature that lets users remove a message from their BBM chat before or after it has been read by the recipient.

Both features will be available for free and without restrictions to BBM users over the next three months. After that, they will be included in a subscription bundle. The company didn't disclose what the bundle will cost.

The upgrade with the new features will be available for download from BlackBerry World, Apple App Store and Google Play.

The concept of timed, disappearing photos and texts was popularized by Snapchat, which after its founding in 2011 quickly became one of the most used social sharing services in the world.

To turn around the company's fortunes, Blackberry needs to find revenue streams beyond smartphone sales, and the company is hoping BBM users are willing to open their wallets. If each of the 91 million active BBM users had paid US$2.50, BlackBerry would have made a profit instead of loss during its second quarter, which ended Aug. 30.