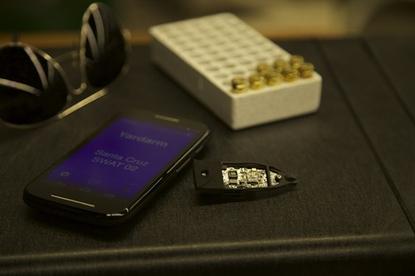 Yardarm's sensor, pictured to the right of the phone.

The Internet of Things has come to police guns.

Yardarm Technologies, based in Capitola, California, has built a telemetry sensor for guns that's being tested by local police departments in Santa Cruz, California, and in Carrollton, Texas. The 9-millimeter bullet-sized sensor fits into the handgrip of a gun and contains data-sniffing components including an accelerometer, gyroscope, wireless GSM telephony and Bluetooth LE. The sensor gathers data about how, when and where officers use their guns, and transmits that data in real time to commanding officers and departments.

Everything from the time the gun is unholstered, to the number and location of shots fired -- even the direction the gun is pointed in -- can be measured and visualized with Yardarm's technology, the company says.

Alerts pertaining to specific events, like a shot being fired, or a gun being wrested away and taken outside of the range of an officer's smartphone, can be transmitted to the station in less than a second, the company claims. Officer locations are tracked through the Bluetooth link to their smartphone's GPS, and by triangulation between the gun sensor and cell-phone towers.

"This improves firearm safety and officer safety, and let's officers do their jobs better," said Robert Stewart, co-founder and CEO at Yardarm.

It may also help keep officers accountable at a time when police conduct has been repeatedly questioned following shootings, including that of Michael Brown in Ferguson, Missouri, in August, or Darrien Hunt a few weeks later in Saratoga Springs, Utah.

The company's data could be useful in post-crime investigations around officer conduct, particularly involving questions about when and how many shots were fired. Encrypted data is sent from the sensor to Yardarm's cloud and then is transmitted to the department with special software that lets police create customized alerts.

The 18-month-old company plans to launch commercially early next year, targeting not just police departments but also the military and private security firms.

"It will result in greater accountability for officers," said Santa Cruz County Sheriff Phil Wowak, who generally praised the technology's aims. A dozen members of the county's SWAT team have had the sensors in their guns for less than two weeks, so their department's understanding of the data is limited. Still, the technology's real-time notifications could help dispatchers respond faster when shots are fired without prior warning, Wowak said.

The police department is developing a response protocol that could be employed for different alerts, Wowak said, similar to a hospital's triage system.

Yardarm's Stewart got thinking about using new technology to improve gun safety after the Sandy Hook Elementary School shooting on Dec. 14, 2012. The company was first focused on technology for private gun owners, to let them remotely engage or disengage the safety on triggers. Other companies and researchers over the years have also tried to develop technologies to enable the use of guns only by those who are authorized.

The most useful application of the sensor could, however, come during investigations after an officer has shot a gun. For instance, "if we know the gun was holstered, that could resolve a critical element in the courtroom," Stewart said.

Meanwhile, police departments in other cities are turning to data in an effort to increase trust between them and the public, sometimes raising privacy concerns in the process. Some officers in Washington, D.C., recently began wearing body cameras, as have officers in Rialto, California. Police in Ferguson are also being trained to use body cameras.

The use of such technology has gained support. A White House petition asking for legislation to require all officers to wear a camera has more than 150,000 signatures.