Apple updates… “So far, so underwhelming” 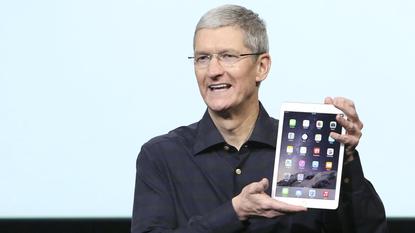 “Apple’s announcements around its tablets and macs was quite a polished progress update,” Moar accepts, “but with more of what the industry has come to expect as a whole.”

According to Moar, an even thinner iPad with more storage and touch ID, together with an energy-efficient iMac with the latest (#)K display technology, will likely kick off the debates afresh about whether there is actually a noticeable difference or whether the new capabilities are just ‘marketing pixels’.

In acknowledging a “couple of interesting developments” however, Moar reports that an anti-glare coating on the Air 2 could potentially drive a spate of purchases from those using iPads out of doors, possibly complementing its recent partnership with IBM to offer particular deals for the field service and sales industries.

Yet despite the acknowledgment, Moar remains unwavering in his belief that the updates include “no game-changers.”

Apple Pay is kicking off on the 20th October, with 500 banks signed up to the scheme.

“This is where things get interesting,” Moar speculates. “Something on that scale for a company that has its biggest market in the US will shake up transfers like few other developments before it.”

However, it’s not only the banks that matter for this, he claims.

“The US has historically struggled with payment developments like chip and PIN, which is only being rolled out next year, 11 years after its mandatory implementation in the UK,” he adds. This is because of the cost to retailers of implementation, not the banks.

“However, the possibility of large-scale data thefts, as happened to Target in January, means that large retailers are now starting to consider measures to secure their data.”

With a concrete release date for the device still not announced, Moar believes Apple can now “happily play wait-and-see” with app developers, holding back on the release until some magic number of supporting apps is reached, potentially to rival those already grown for Android Wear and Pebble.

In a recently-published report, Juniper Research outlines how Apple’s publicity for the Watch will bless all smart watch makers to a degree, but their user base will be limited due to iOS exclusivity.

“Any delay in launch will only harm Apple’s revenues, or postpone them to a later date,” Moar claims. “This is good news for multi-platform watches like Pebble who won’t lose their dedicated current audience for longer, but will be of little concern to other smart watch vendors.”

However, according to Moar, Apple’s biggest shake-up development wasn’t mentioned at all at the event.

The Apple SIM brings a multi-MNO (mobile network operator) functionality to iPads that ‘gives you the flexibility to choose from a variety of short-term plans from select carriers in the U.S. and UK right on your iPad.

“So whenever you need it, you can choose the plan that works best for you — with no long-term commitments’,” he reports. “That this is tucked away at the bottom of the iPad Air 2’s product page speaks volumes.”

Although there are multiple MNOs taking part in this initiative, Moar believes they likely don’t want these plans to roll out to larger SIM markets, like smartphones.

“Such a device would undermine the existing business model of MNOs,” he adds, “allowing consumers to change plans on the basis of the latest deals without switching devices, greatly intensifying the competition among operators who can currently depend on the majority of consumers staying with the same plan for two or so years, guaranteeing revenue.

“Allowing consumers to potentially switch carriers every few months within a few minutes would utterly disrupt their current business model.”

However, in the current US phone market Moar believes this is unlikely to happen, at least with Apple SIM.

With the bulk of US iPhones shipping at subsidised prices through MNOs, Moar thinks phones with the Apple SIM inside would likely be offered without the subsidy, greatly increasing the handset price

“This would prove a great disincentive for consumers, as the benefits and savings gained through the lack of a long-term contract would be outweighed by the increased cost of an unlocked phone,” he adds.

“As Apple is in the business of selling devices, it is unlikely to aim for such a goal.”

For a company that gains more of its revenue through services and data transactions (Google, Amazon etc…), Moar concludes that having such a phone as a loss-leader gateway addition to data-heavy service plans, multi-network SIMs could be quite the differentiating, consumer-friendly boon they are looking for.