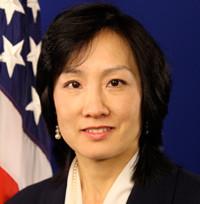 After the White House's announcement Thursday, several tech groups praised the nomination. Lee, who currently serves as the USPTO's deputy director, is a popular choice in the technology industry as IT companies have major rifts about patent policy with small inventors and pharmaceutical firms.

In general, the U.S. tech industry has pushed for legislation that would make it more difficult for patent holders -- including patent-licensing companies -- to sue for patent infringement, while many small inventors and pharmaceutical companies have resisted calls to weaken patent protections.

Lee, as USPTO's director, wouldn't have the power to create new patent law, but she would have wide latitude to interpret existing law and Supreme Court patent rulings and to launch new initiatives focused on issues such as patent quality. She would also have an expanded role in advising the Obama administration on its intellectual property policies.

The USPTO's directorship was vacant for a year and a half as groups on both sides of the patent reform debate pushed for a leader friendly to their positions. In June, after rumors that Obama would nominate Philip Johnson, head of the patent practice at pharmaceutical company Johnson & Johnson, many tech companies objected.

Microsoft, at odds with Google on some tech policy issues, nevertheless praised Lee's nomination. The director of the USPTO has an important job, Erich Andersen, vice president and deputy general counsel in Microsoft's Intellectual Property Group, said in a statement.

Lee "understands the importance of ideas and innovation to jobs and growing our economy," Jon Potter, president of the trade group, said by email. "She also knows that America's businesses are increasingly at risk for frivolous lawsuits filed by patent trolls.

Lee, as USPTO's deputy director, also served as deputy undersecretary for intellectual property in the Department of Commerce. As deputy director, she provided oversight of the management, policy and budget of the USPTO, an agency with more than 12,000 employees.

She earlier served as the first director of the USPTO's Silicon Valley office. Before joining USPTO in 2012, Lee was deputy general counsel at Google and the company's first head of patents. She was also a partner at the Silicon Valley-based law firm, Fenwick and West.