Lenovo's Yoga 3 Pro excels as a laptop, but doesn't win as a tablet 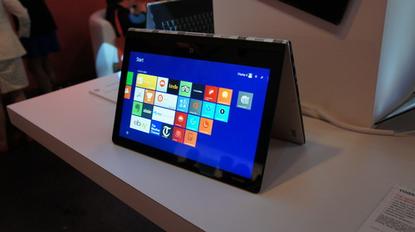 Lenovo has done its best to perfect the convertible PC with the Yoga 3 Pro, but has still ended up with a light laptop and a heavy tablet.

Maybe it's me: I have always struggled to understand the point of the convertible category, because it's very difficult to create a product that's both a good laptop and a good tablet. The Yoga 3 Pro is a great laptop, but using a device that weighs over one kilogram as a tablet is always going to be a struggle.

The Yoga 3 Pro has two big draws: the excellent 13-inch screen with its 3200 by 1800 pixel resolution and the design. Lenovo is right to boast about the new 360 degree hinge it has developed, which is made from 800 pieces of steel and aluminum, according to the company. The hinge makes the device more stable; the screen can be put in any position without the Yoga toppling over, for example.

The hinge has also helped make the product both lighter and thinner than its predecessor at 1.19 kilograms and 12.8 millimeters. The fact that the whole device isn't made out of metal (just the shell) also helps keep the weight down. It's lighter than the 13-inch version of the MacBook Air, which is 1.35 kilograms, but the Apple laptop is thinner.

It's probably best to hold off on more in-depth comparisons with the latest MacBook Air, since updated models may debut at an Apple event on Oct. 16. After all, if Lenovo can put a high resolution screen on a thin laptop so can Apple. The question is if Tim Cook and company want to do it.

The rest of the Yoga 3 Pro doesn't quite attain the same quality as the screen and the design. The keyboard and mouse work fine, but nothing stands out. Lenovo has decided to go with only five rows on the keyboard, which means the number and function keys are shared.

The battery life is an important feature on any mobile device, and Lenovo promises up to nine hours on the Yoga 3 Pro. A test showed 7 percent of the capacity was used by playing a YouTube clip for 30 minutes with standard settings. After playing the clip, the laptop promised another five hours and 45 minutes of battery time.

Price is the Yoga 3 Pro's biggest drawback. U.S. pricing starts at US$1,350 and European pricing begins at €1,599. That's a high starting price for a laptop regardless of the screen resolution or how many pieces comprise the hinge.

At that price you can buy one or two real tablets, a tempting alternative for many, or just purchase a cheaper laptop. But for people who want a laptop that stands out (it comes in orange) or have an employer that's willing to pay, the Yoga 3 Pro is a very viable alternative.