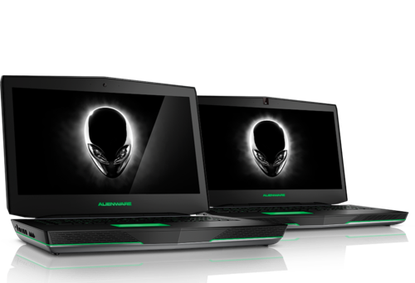 Dell is cranking up laptop performance with an overclocked 4.4GHz Intel Core i7 chip in its new Alienware 18 laptop, which is targeted at gamers.

The company on Thursday also announced an Alienware 17 laptop with optional Core i7 chips with clock speeds surpassing the 4.0GHz threshold. Processors running at that frequency are rare in laptops, though they can be found in gaming desktops.

Over the past decade, chip makers reverted to adding more cores instead of cranking up clock speeds to balance system performance and power consumption. Laptop chips mostly operate at frequencies between 1.4GHz and 3GHz, and most users won't need 4GHz laptops. But gamers love the extra performance to run intense games.

Dell overclocked the fourth-generation Intel Core i7-4940MX processor in the Alienware 18 to run at 4.4GHz, making it the chip maker's fastest mobile processor. An optional Core i7-4910MQ processor in Alienware 17 has a frequency of 4.1GHz.

The 4.4GHz chip could generate a lot of heat, and Dell did some tweaking to fit the processor in the laptop's small frame.

"Alienware engineers really got creative and developed a new thermal solution to ensure reliable and cool operation in such a small system," Intel said in a blog entry.

The laptops use chips based on the Haswell microarchitecture.

The customizable Alienware 17, which has a 17.3-inch screen, starts at US$1,399, and is also available with slower Core processors and an Nvidia graphics card. A 3D display is optional.

The Alienware 18, which has an 18.4-inch screen, is priced starting at $2,099. It supports dual-graphics Nvidia or Advanced Micro Devices graphics cards.

The laptops support 32GB of RAM. Battery life of the laptops wasn't immediately available, but expect it to be just a few hours.