There were still some worries about Oettinger's technical knowledge, though 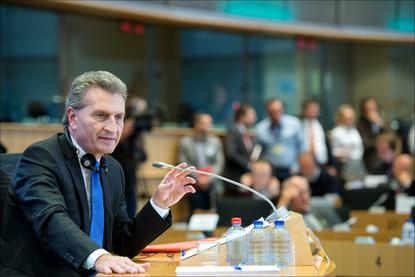 Günther Oettinger, EU commissioner-designate for Digital Economy and Society during his evaluation hearing in the European Parliament.

Andrus Ansip and Günther Oettinger have won informal approval from the European Parliament to be the next EU digital commissioners.

If they are approved when the full slate of new commissioners is voted on Oct. 22, they will take over the EU's digital agenda form Neelie Kroes in a realignment of that area when a new slate of commissioners take office Nov. 1. Pending that final vote, Ansip is slated to become Commission vice president for the Digital Single Market, while Oettinger is designated to take the Digital Economy and Society spot.

All proposed commissioners have been assessed by Members of the European Parliament (MEPs) during the last few weeks in three-hour long hearings.

While Ansip, 58, who is the former prime minister of Estonia, seems to have passed his assessment hearing unscathed, there were some reservations about Oettinger, a German who is currently the EU's Commissioner for Energy, according to an official with Parliament who spoke on the condition of anonymity.

Oettinger generally gave the impression during the hearing that he lacks technical knowledge, said Julia Reda, a German MEP for the European Pirate Party and vice chair of Green/EFA. Contradictory statements he made on net neutrality and his take on copyright, which he primarily approached from a business standpoint, were also worrying, she said.

Moreover, in a slip up, he called celebrities whose nude photographs were posted online "dumb". That comment called into question his commitment to data protection for everyone, Reda said.

"In comparison, Ansip gave a much better impression," according to Reda, adding that Ansip set specific goals such as eliminating geo-blocking for online videos, while also giving support to open-source, EU-funded software.

The Parliament will next send its evaluations to Commission President-elect Jean-Claude Juncker and discuss desired changes before voting on the slate of candidates in two weeks.