Scientists have built a prototype of a device that can diagnose the deadly Ebola virus by shining light on viral nanoparticles on silicon. 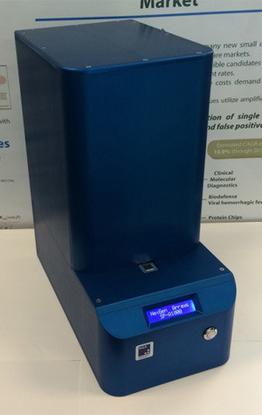 Scientists have built a prototype of a device that can diagnose the deadly Ebola virus by shining light on viral nanoparticles on silicon.

With more than 6500 cases of the Ebola virus in West Africa, 3000 deaths and now one confirmed case in the United States, scientists are trying to find a way to detect the deadly virus more quickly, cheaply and easily.

And they're increasingly using nanotechnology to do it.

A team of researchers at Boston University's College of Engineering and its School of Medicine has been working for the past five years to develop a portable device that uses a silicon chip to diagnose a patient with Ebola, or other hemorrhagic fever diseases like the Marburg virus or Lassa Fever.

What's potentially important about this diagnostic device is that it could easily be used in remote areas with limited electrical and medical resources.

"What motivates us is that there are some really good tests to diagnose these diseases but none of these tests are easily transported where they are needed," said John H. Connor, an associate professor in BU's Department of Microbiology and a virologist on the research team. "They have to fly in heavy, electricity-requiring machines that require specialized training and special ingredients to make the diagnostics work properly. They're expensive, time intensive and, most importantly, they're pretty much locked to a clinical lab."

That's a problem for countries like Liberia, which has suffered more than 3,400 cases of Ebola and more than 1,800 deaths in this outbreak, according to the Centers for Disease Control and Prevention (CDC).

The World Health Organization (WHO) has reported that the Ebola virus, once known as Ebola hemorrhagic fever, is one of the world's most virulent diseases, with a fatality rate of approximately 90%. Spread by direct contact with the blood, fluids and tissues of infected animals or people, authorities have attempted to contain the outbreak, which began in Guinea and has spread to other countries, including Liberia and Nigeria, which have both declared health emergencies because of it.

Liberia, for example, simply doesn't have the resources to dot the countryside with well-equipped, high-tech clinics that can run traditional diagnostic machines.

Connor said his research team, which includes scientists from the University of Texas Medical Branch, are even more focused after learning that there's a patient in the U.S. with Ebola. But, he said, people around the world have been suffering from hemorrhagic fever diseases for a long time and that has motivated them all along.

"We would love to be able to provide technology where it could be taken out from the clinical lab and provide it at the point of care, the point of need," he added. "The number of problems that face diagnosis and care are minimized in the United States but they're huge overseas." Connor explained that the researchers put antibodies on a silicon chip. The antibodies, a naturally occurring protein used by the immune system to identify and attack viruses and bacteria, can grab onto the Ebola virus.

Researchers then can flow a patient's blood over the chip and, if there's Ebola virus present in the blood, the antibody will capture it. Field workers could then tell if there's virus on the chip by shining light from multicolor LED sources on the viral nanoparticles.

"When we bounce the light off of it, you see a spectrum that changes when there's a virus particle present," Connor told Computerworld, adding that the spectrum acts as a distinct signal denoting the specific size and shape of each nanoparticle. "The spectrum changes based on the virus. It's large enough for us to very easily see."

With enough funding, the diagnostic device could be ready to be used in six months, but, Connor said, it's more realistic to expect it to be in official use in about two years.

The BU-based team isn't the only one using nanotechnology to try to fight the 2014 Ebola outbreak, which is the largest in history and the first Ebola epidemic the world has ever known, according to the CDC.

In August, scientists at Northeastern University reported that they have been using nanotechnology to find an effective treatment for the virus.

What makes finding a vaccine or cure such a challenging job is that the virus mutates so quickly. How do you pin down and treat something that is continually changing?

Thomas Webster, professor and chairman of bioengineering and chemical engineering at Northeastern, said nanotechnology may be the answer to that problem. Webster is working to develop nanoparticles that can stop the Ebola virus from mutating, and then kill it.

The ability to do that would be a game changer in fighting this virus, according to researchers.

"Since viruses, like Ebola, are nanostructures, many of us believe the only way to treat them is by using other nanomaterials," Webster said in a previous interview. "In nanotechnology, we turned our attention to developing nanoparticles that could be attached chemically to the viruses and stop them from spreading."