The Navy flew its new drone across the US Wednesday night 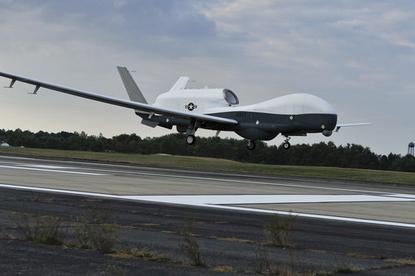 The MQ-4C Triton took off from Northrop Grumman's airfield in Palmdale, California, Wednesday evening and flew along the southern U.S. border and the Gulf of Mexico and Florida before turning north to Naval Air Station Patuxent River in Maryland.

It landed just before 8 a.m. Eastern time, about 11 hours after takeoff, according to Naval Air Systems Command. Northrop Grumman released video of the flight.

The drone was flown by operators who guided it to more than 50,000 feet as it flew along the Atlantic coast, according to the Navy. That's well above civilian airlines that generally fly to around 35,000 feet.

The MQ-4C is part of a U.S. Navy program called Broad Area Maritime Surveillance (BAMS) that is intended to provide the Navy the ability to keep watch over a large area. BAMS would, according to a U.S. Navy publication, "provide near worldwide coverage through a network of airborne orbits operating 24 hours a day, seven days a week."

Originally, a fleet of the drones was expected to be in service in December 2015, but that has since been pushed back to sometime in 2017.

After the aircraft's arrival at the Patuxent River base, sensors will be added to the aircraft including a radar that provides a 360-degree view for detecting and identifying ships. Then, tests will commence of the sensor system, the communications on the drone and on an expansion of its maximum altitude.

It will soon be joined by two additional MQ-4C drones that will also take part in the testing.